Get your creative juices flowing and submit your own media, art, ariticles, or whatever you think people will find at least mildly entertaining to this site. We promote intelligence.
Post Reply
27 posts

Eugh. The metagame is so out of whack right now. So many walkers and exploit bots in general. It's terribad. All of my actual cute and colourful robots can't repel firepower of that magnitude. If you ask me, walking deathspinners are like... 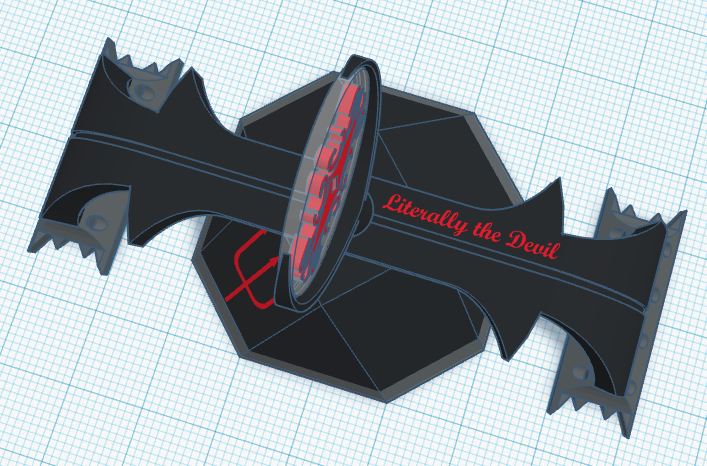 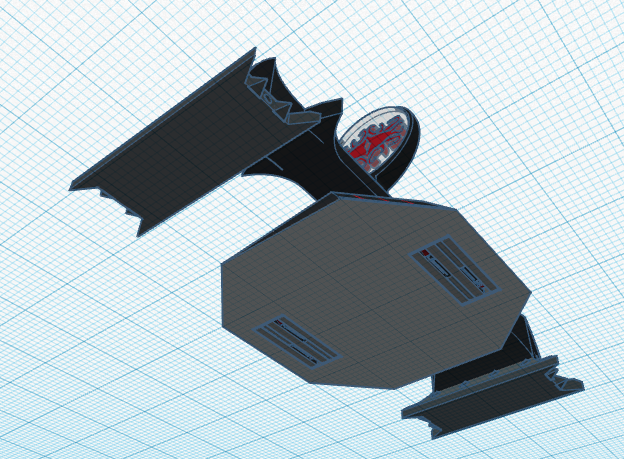 Yes, it's an <del>Alexbot</del> exploitative walking indestructible fortress of death complete with an appropriate logo. If you can't beat 'em, join 'em. If this doesn't make the walker bonus go the way of the dodo, I don't know what will. 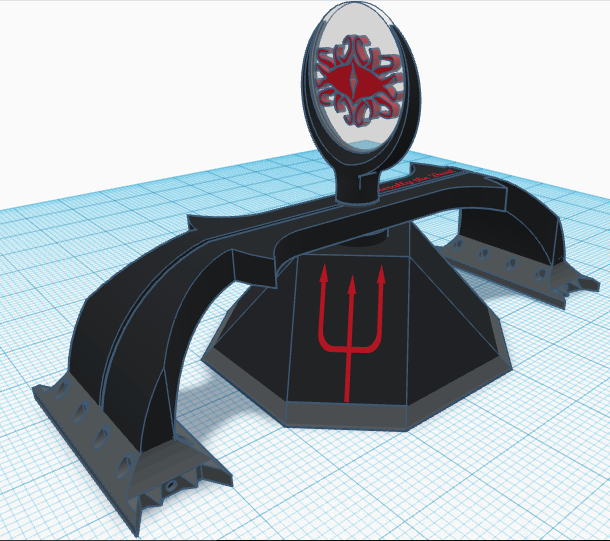 Looks like your fairly standard walking overhead deathspinner, right? Probably hits like a truck, but is laughably easy to stuff if you have a <del>Lazbot</del> brick. Well, it's Literally the Devil, after all, so it has a party trick. The weapon shaft is really long and the whole assembly is on a platform with pneumatics to boost it as shown below. There's a clutch to hold it in place at the top and flamethrowers in the weapon heads because spinning with fire turns it into spinning 2 win. The body is extremely dense and heavy, and the bar is made of a fairly lightweight alloy, keeping it at a reasonable weight. Its tip speed is best described as "bonkers". 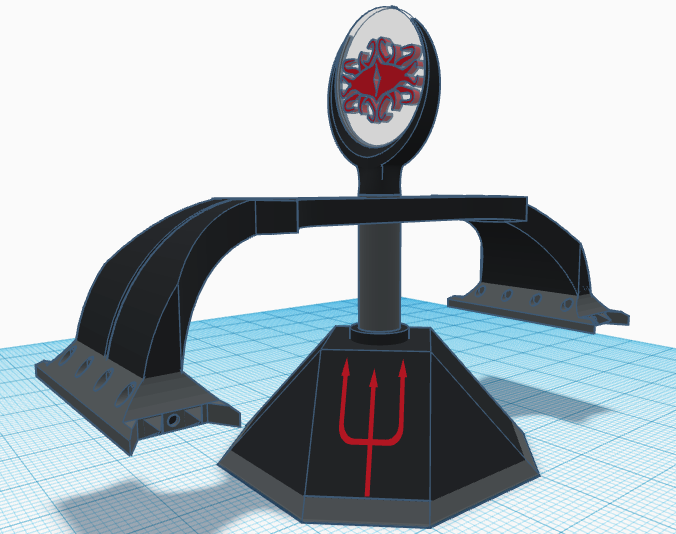 The title is a link to the album and here's some theme music: While You were Shouting at the Devil We were in League
hi. :)
Top

-if you were active on the discord youd be more aware of the forum opinions regarding walker bonuses
-this is unlikely to be nearly as annoying as you think it will be
‽ ROBOTICS
CHAMPIONS: Lightweight//Ruination 4//Nick's Fuzzy Rules -- -- Hobbyweight//Bot-o-Rama//Buzzkill

So, you know when you're like...basically nocturnal, and you have a moment where you stare at your sweaty, zit-faced, frizzy-haired greaseball reflection on your computer screen and are like, "WTF am I doing with my life?" That was me this morning. It got me thinking about all of the ways that I've screwed up my life, which sent me into a depressive tailspin, so to pull out of it, I decided to re-evaluate all of my many issues and blame my shitty high school life for the majority of them. Really, all of my failings are the fault of that peculiar adolescent creature known as the... 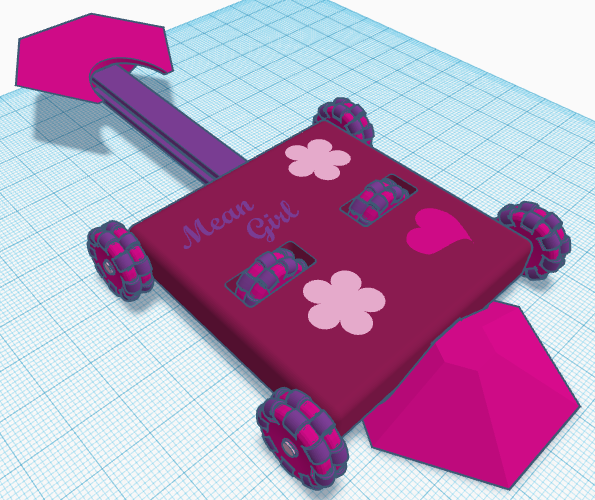 So naturally, this bot is designed to be like... really annoying. It's a 100% invertible puncher, like Smilodon or Skeeter, but with H-drive for the sake of strafing. It's mostly about just NOPE-ing weapons at long range and disrupting all of your carefully planned flaking or angling in thingies. You wanna dance&#33;? Mean Girl's ready, and she'll like, totally put you to shame. 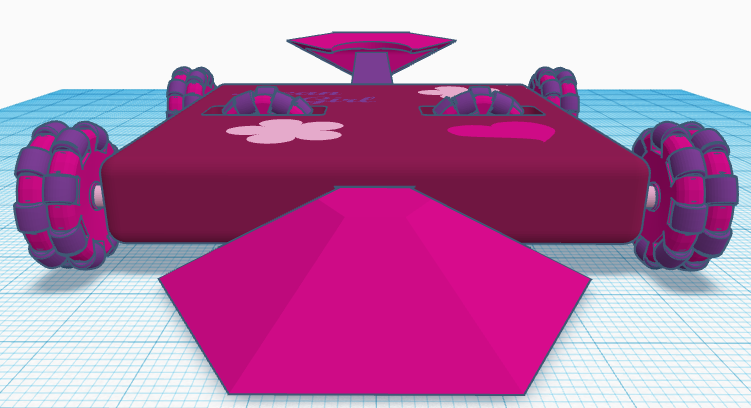 Anyway, interesting design, i like it. As Alex said, it's going to be a PITA to fight.
winter! she/they pronouns, trans rights babey! 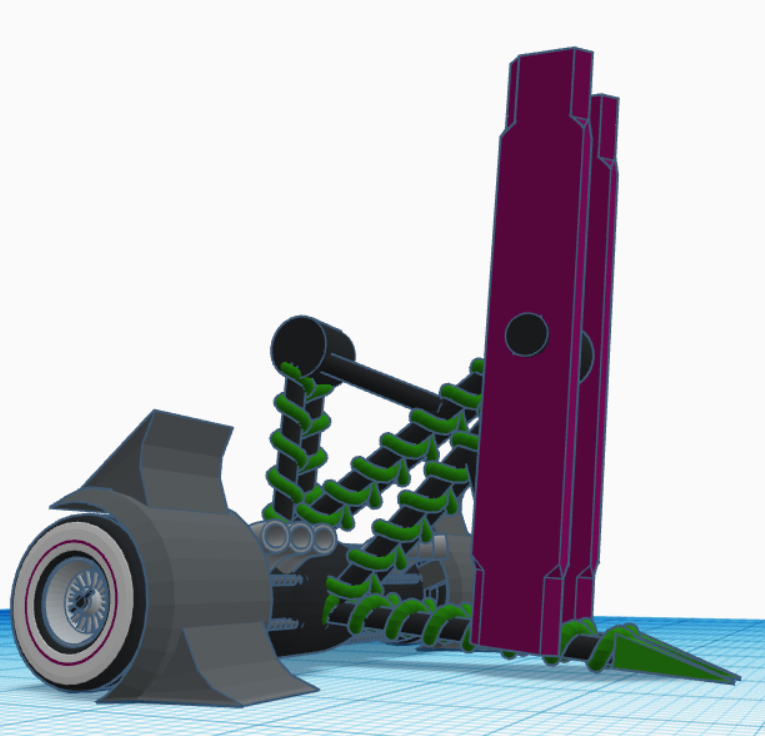 So it's a big, bad vert with a Nightmare-sized blade and some hinged wheelguards. It's invertible, though on one side it has sharp feeder skids and on the other, the blade protrudes past the supports, forcing you to face it. 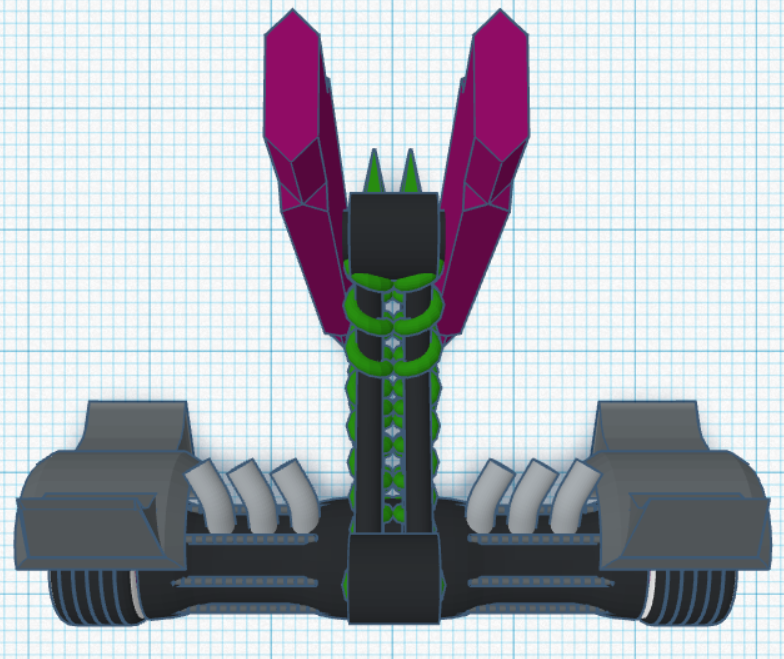 None of the pics I took really show it well, but the main point of this bot is to have a lot of range and be able to turn a bit to hit bots that try to sneak past its weapon. IDK if it'll work, but it's something I wanted to try. 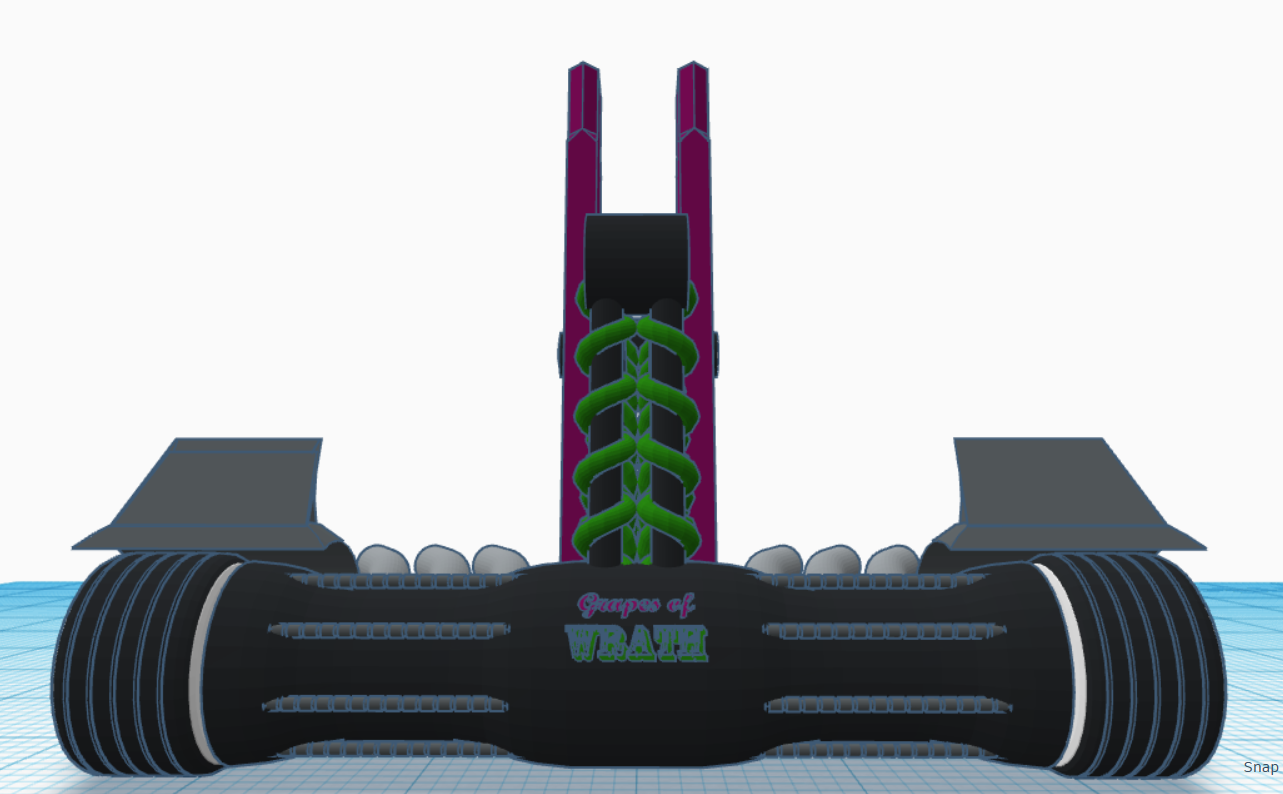 So yeah, with all of the whitewall tires and exhaust pipes and vines, this was an homage to the Monsterworks school of bot building, mostly because I wanted to see if I could ape it convincingly, and a bit because I just miss my brother, I guess. 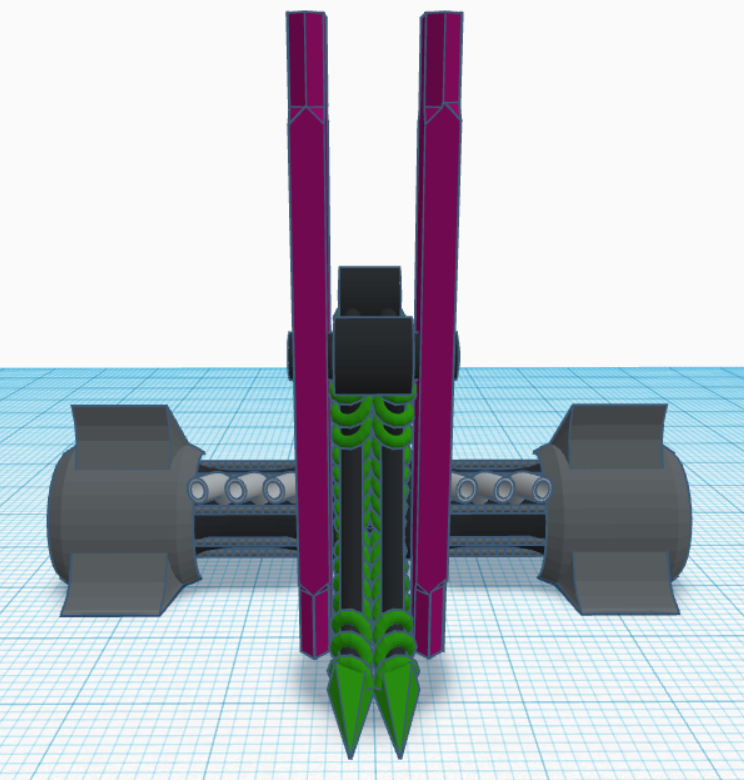 Suggestions, feedback, and constructive comments (not just, "waaah, I live in my mom's basement/equivalent and will quit if you enter that") are appreciated.
hi. :)
Top

So, you know how the other bot is all Alex style and probably doomed to failure? I made one all "Laz" style too and finished at like 2:30 AM, thoroughly hating myself. Who needs sleep, amirite? 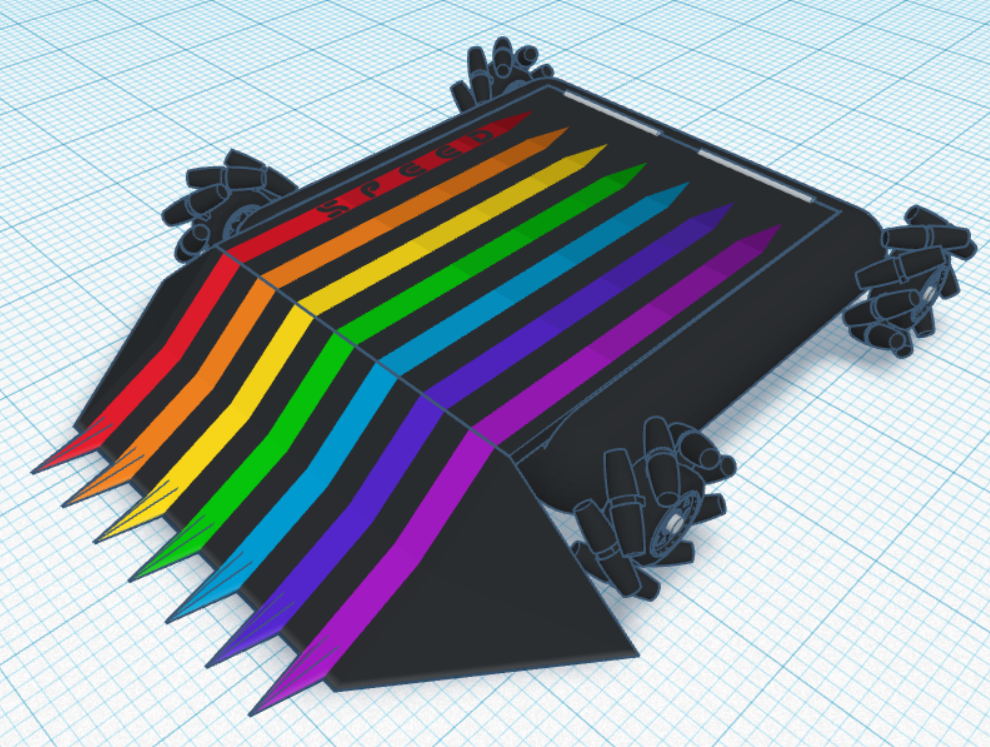 Laz was telling me about the R4 rules and how most of the changes might become standard, like the speed stuff. I was also thinking about how Ecstasy was surprisingly successful. It was really a combo of avoiding being hit (mostly due to numbers and being kinda quick) and having decent control weapons that could constantly disrupt opponents. Then I saw this:

<blockquote class='quote_blockquote'><dl><dt>Quote:</dt><dd>&nbsp;</dd></dl><div>-Flippers: Flipping weapons lift an opponent off of the floor in a fast, single-direction movement (examples: Bronco, Apollo). The amount of distance the opponent is tossed after a flip is determined by the weapon stat: 2 feet for every point invested. Damage is dealt after a flipped robot collides with the wall, ground, or some other object.[/quote]

That is a massive buff to flippers. Where one point used to get them six inches of flipping distance, it now gets them 2 feet. They're four times stronger&#33; I knew I just had to make a flipper&#33; 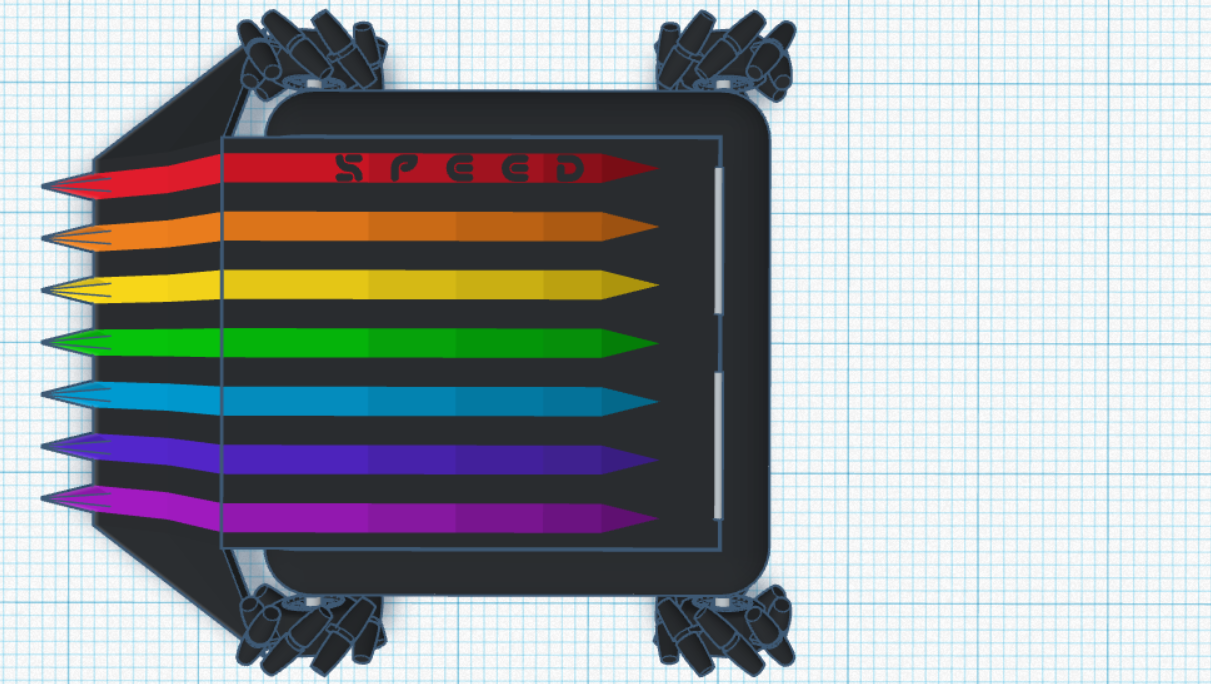 I wondered if I could make that concept work with a single, full-sized robot. Obviously, it'd need to be blazing fast in order to cleanly flank directional spinners and other weapons, and totally avoid getting hit. It would also need a quick weapon (flipper&#33;) to stop them from just pivoting while it's wedging them. Shell and other 360 spinners would be its kryptonite, so it'd need the right kind of tournament composition to be successful.

In order to provide a small target, it'd need to be Minotaur levels of compact, which is what I've tried to make it. This is a really small middleweight&#33; Being low was also a priority, allowing it slip right under the bars of overcutters and a lot of overhead spinners in general.

I decided to give it mecanums to make flanking even easier. With mecanums, it should be able to keep its front pointed at opponents while circle strafing, removing the wasted time of turning from the equation. I'm not sure if this'll work, but S P E E D will hopefully be insanely hard to actually hit and have a flipper capable of chaining opponents or scoring an OOTA. I'm hoping that its armour will be enough to avoid any serious ramming damage from your standard 7/8 speed brick.

Finally convinced Alex to render this bot. Thanks!
So yeah, it's Momma Bear, the Reckoning: Revival champion. Still an obnoxious cluster that wouldn't have worked in any other field.

This is basically the successor to S P E E D. It's probably going to be entered in ROBOTS3 when I convince one of my brothers to give up a spot for it. Stats TBD, but it's gonna be FAST, don't worry.
Top
Post Reply
27 posts