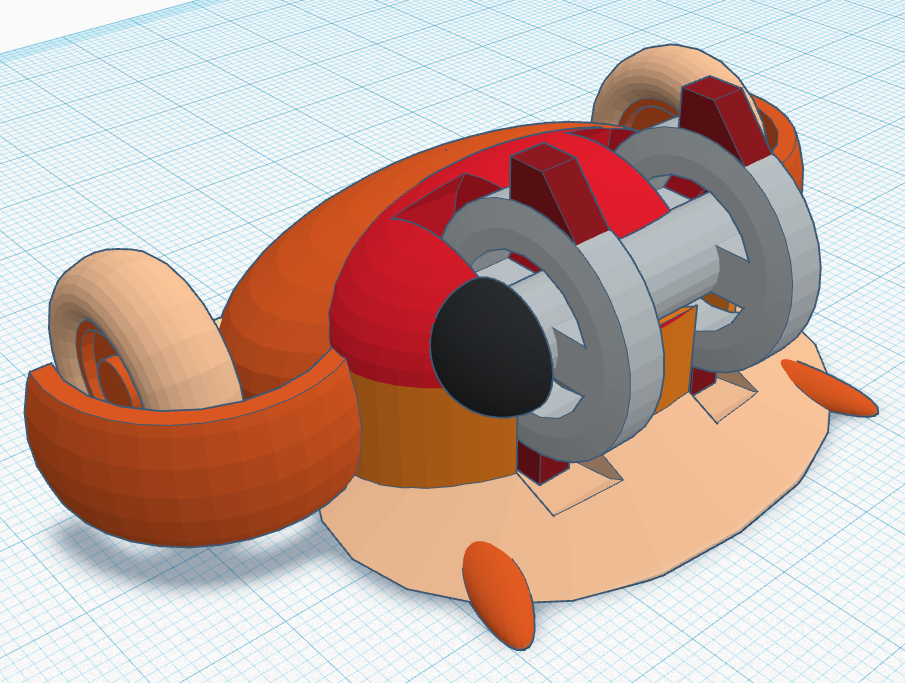 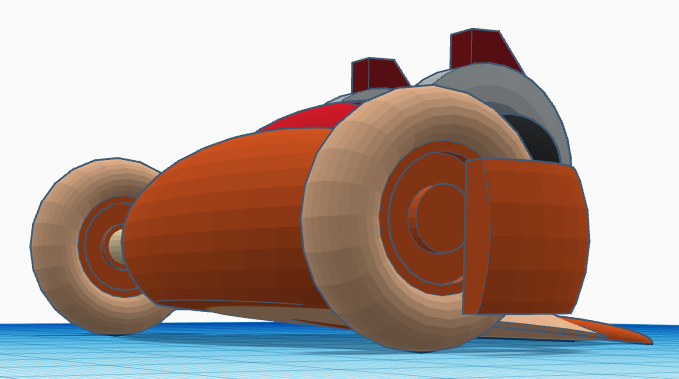 Featuring the latest in "What's a corner? Never heard of it." technology, this double-disc vertical spinner is the most aquatic-themed Aquatic Robotics robot in a while. It self-rights by creating large dents in the arena floor

This is my entry into The New Blood Championship.

Here it is, my first sawbot&#33; This robot probably took me the longest to design/CAD of any robot I've made except maybe for the original Undertow (my first robot.) Not that it's necessarily going to be any good, of course... 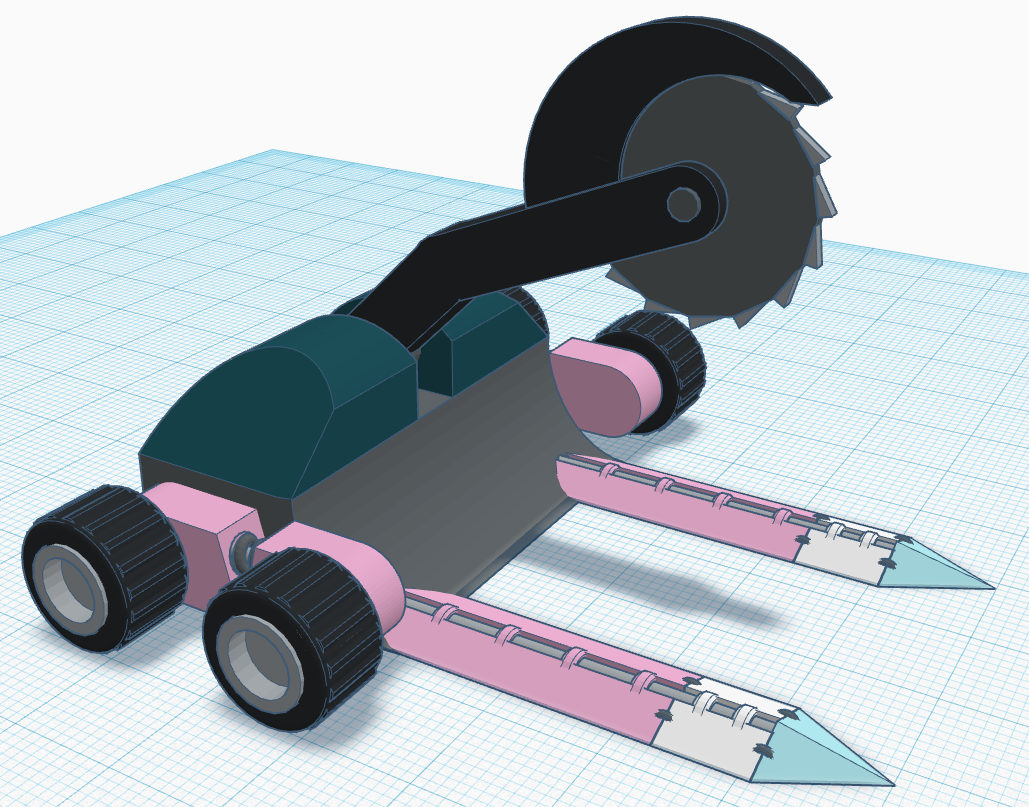 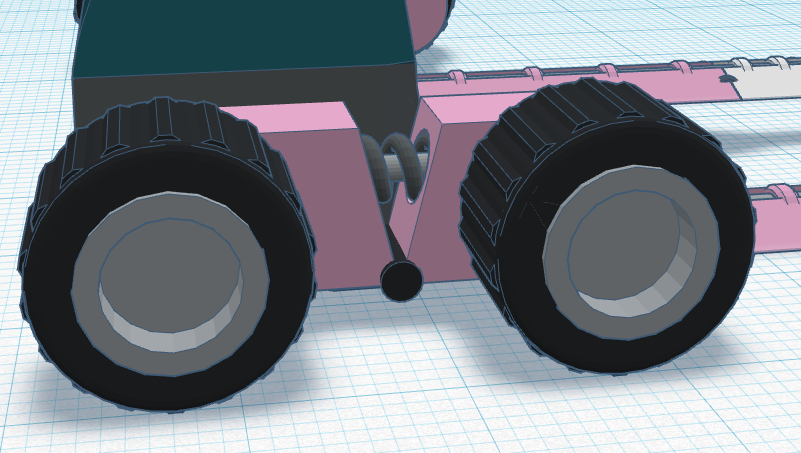 It's also got a somewhat unique drivetrain. It's 4WD, but the forward set of wheels is shock-mounted as you see above. The travel isn't huge: if an opponent gets under the prongs, they'll likely still be lifted into the air unless the wedge is shallow. Instead, the shocks are there to improve my wedging ability: part of the robot's weight rests on the front wheels and part of it rests on the prongs, putting them somewhere between a hinged wedge and a 2WD wedge in wedging priority (theoretically.) 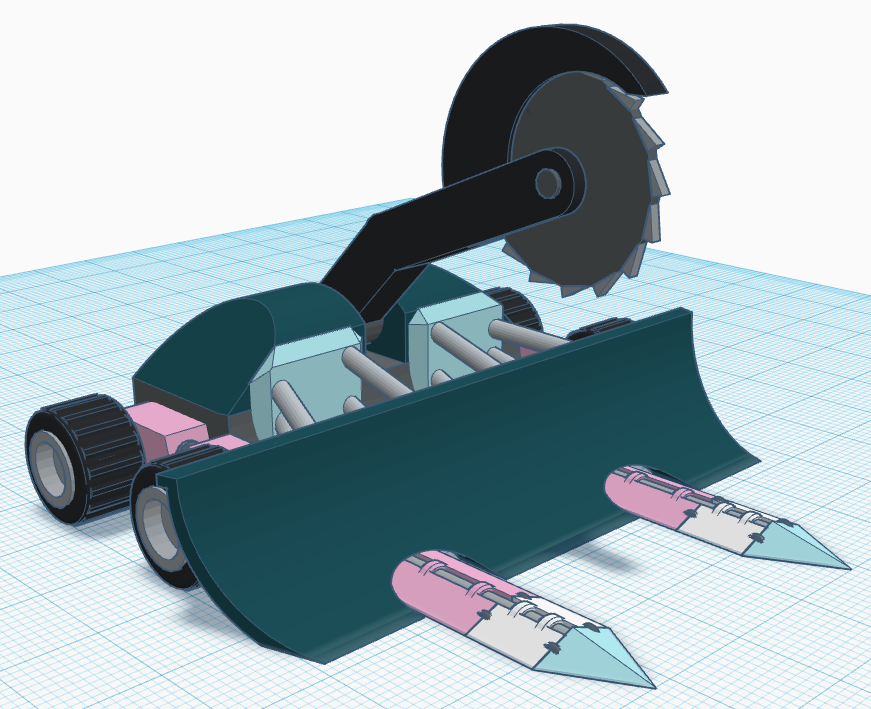 Now you may be saying "but attackfrog, any spinner is just going to knock those wheels right off&#33;" and you'd be right. Unless, that is, I put on this shield attachment, which mounts to the front of the chassis. Less "dustpan" area, but increased survival.

This was originally going to be my featherweight entry to CBC2, but it looks heavier than that to me. I think I'll swap it with Salad Spinner, as that robot hasn't fought in anything yet and needs some work in any case.

And I came up with another robot, this time in a very short amount of time. I'm swapping out Smooth Criminal for this one in Hobbywham.

Apparently there's a real life Juice Master named Jason Vale who would like to sell you on his magical juice only diet which will make you healthier than anyone has ever been before. This has pretty much nothing to do with that except for that it kind of looks like an orange, and orange juice is a thing that people drink.

It's a "melty-brain" spinner with flails on springs and a pair of wedges flopping around on steel rings on the front and back. The springs retract when the robot isn't spinning, reducing their length by about two thirds. As it spins up, the centrifugal force stretches them out until they're whirling around, ready to cause Hellachopper-style devastation.

Some updates&#33; First, a new robot, in the Hobbyweight class: 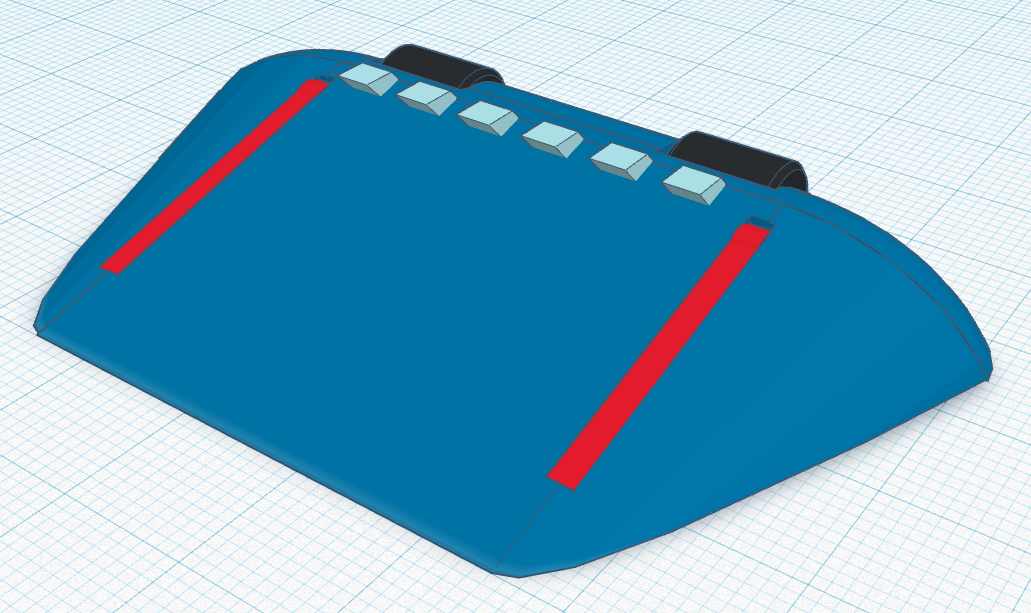 It's a lifting wedge&#33; There are a couple more pictures in the Imgur album of the rear of the robot and of it self-righting.
I'm putting this one in CBC2.

Second, I redrew Undertow IV. I kept the same idea, but the first CAD I did, while detailed, had a bunch of annoying TinkerCAD artifacts that would have been impossible to get rid of. So I just made it from scratch again. I didn't redraw the lifter mechanism because, well, you know what it would look like anyway. And I didn't do the hammer blocker because there are no hammers in the CBC2 heavyweight division. If someone enters one I'll add it back again. Anyway, without further ado, and for the second time: 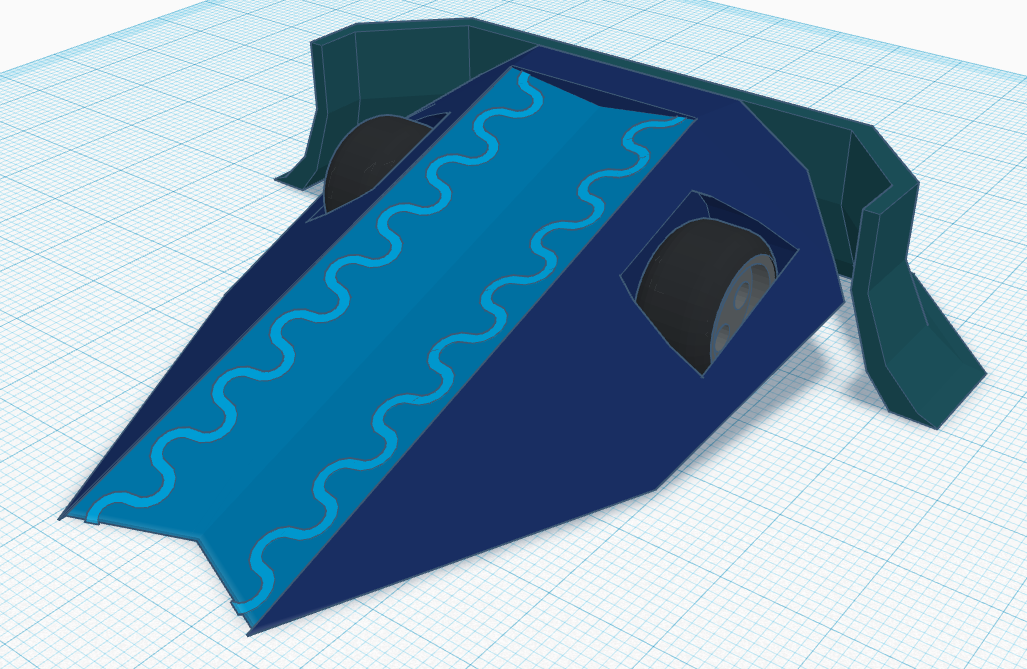 Once again, your favorite rear-hinged flipper with the armored rear end. The shield is shock-mounted to the chassis, and can be removed if it's not needed in a match.

Third, and final update (for now): I made some smaller changes to Mega Frogbot and Salad Spinner. 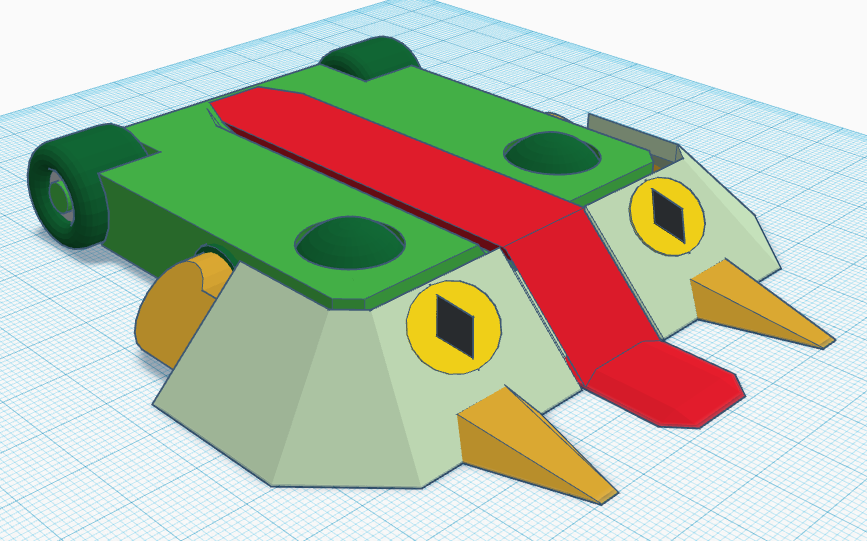 Mega Frogbot's now using a hybrid drivetrain: wheels in the back and trackballs up front. Think of it as the robot equivalent of a mullet. This will make it drive closer to a 2WD robot, rotating around the back of the robot, but it will have much better rotational acceleration thanks to the trackballs. And it won't have as many knockback or high-centering issues as before, with full trackballs.
It's still a four-bar flipper with a hinged wedge (the wedge can also be locked in place if needed.)
The album has a picture of the underside as well. 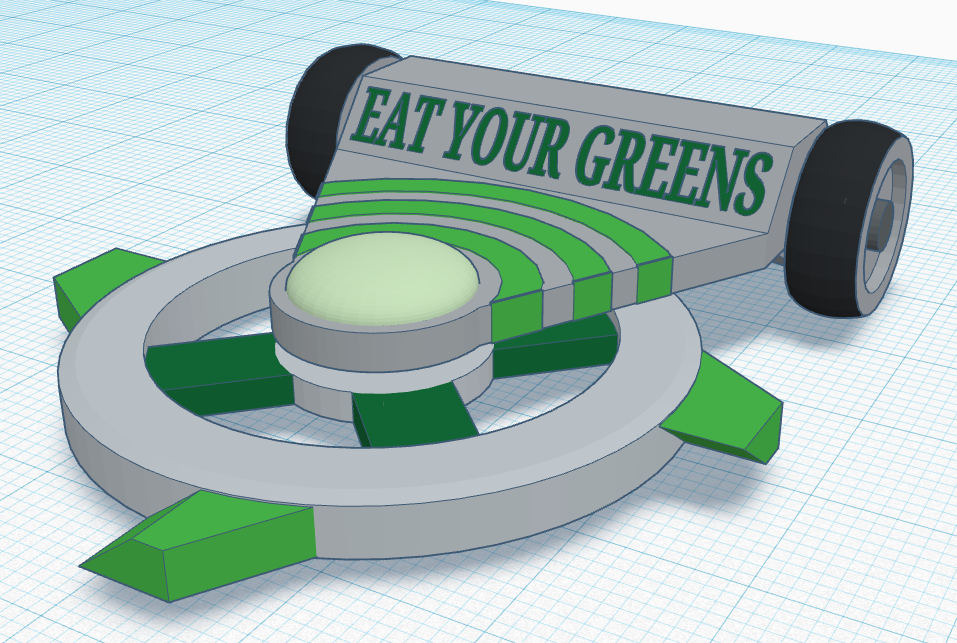 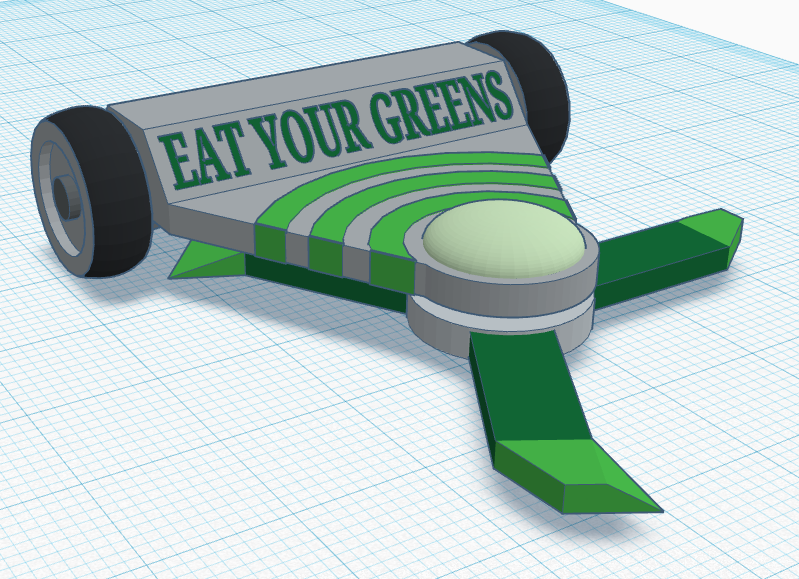 The main configuration of Salad Spinner is mostly unchanged: the only difference is that the disc's teeth now alternate between cutting from below and above.
The bigger change is the addition of a second configuration, which uses a much lighter three-bladed propeller in place of the disc. This gets rid of a lot of weight, making Salad Spinner less sluggish to drive and allowing me to swap in some more powerful drive motors.


And there's my CBC2 team&#33; I'm still feeling pretty good about Obsession and Red Menace, so I'm keeping them as they are.
Now I just need to stat these things...

I couldn't think of any way to make Salad Spinner interesting or at least effective (and the one way I did think of is banned), so it's off the team. Spinners have never really been my thing anyway, to be honest. I'm replacing it with...

It's gold-plated and covered with (imitation) priceless gems. Big chunky wheels and a good drivetrain, but relatively low armor except in its anti-spinner shield configuration. The shield (and, of course, the wedgelets) are hinged. 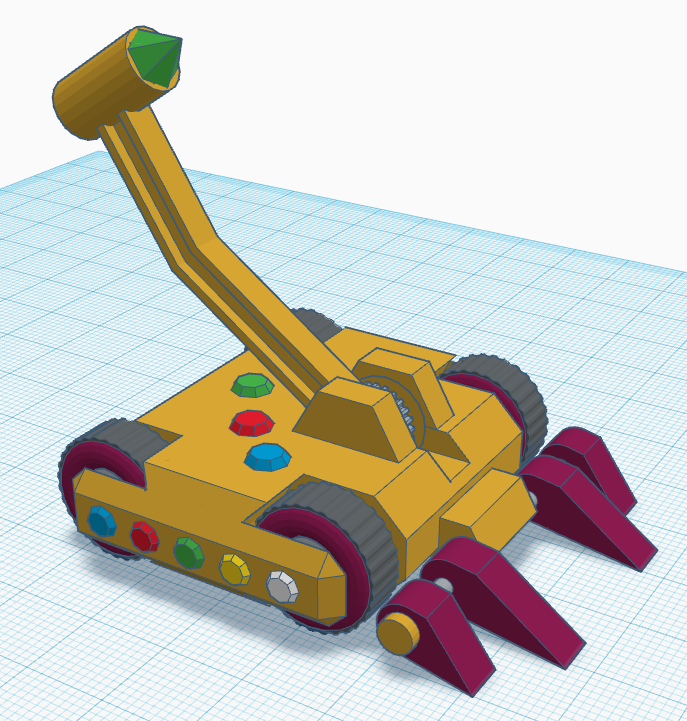 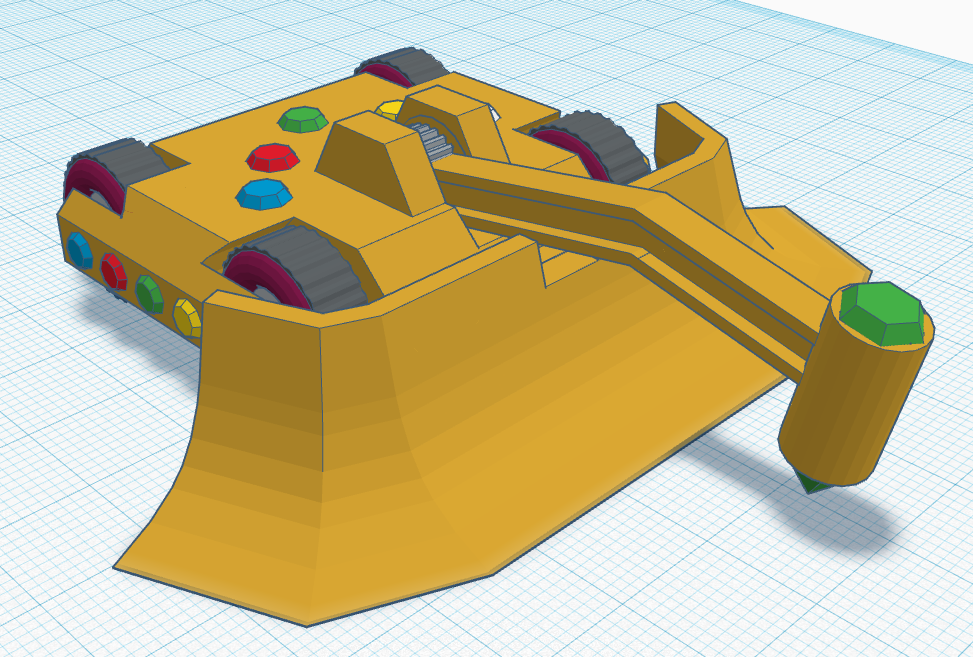 These renders are looking really sweet, and I love the ideas behind them: Red Menace and Obsession especially. It's good to see another walking turret hammer out there. Mastodon was the last one and it won me a championship, so you're definitely in good company. Either way, I think your team will be a real contender in CBC2.
Mastodon... Extinction (HW)
Osiris... Armageddon! (MW)
Elrathia... ROBOTS (LW)
Magnolia Pico... Ruination 4 (MW)
RipTide... ROBOT2 (FW)
Black Diamond... Cherry Bomb Classic 3 (HW)
MADSCIENCE... ROBOTS 3 (LW)
Abyss... ROBOTS 3 (MW)

I finally dumped TinkerCAD&#33; I definitely liked how easy it was to use, and you can do a lot with it, but it is all too easy to just end up with a mess. It's also really slow, has very limited color options, and your renders always end up with this annoying blue grid at the bottom. So, bye TinkerCAD&#33; Thanks for the memories&#33; I've switched to Blender. (It's free, and no more complicated that anything else I tried <small>cough Rhino cough</small>).

So to break my two-month streak of no new robots, here's Trident&#33; 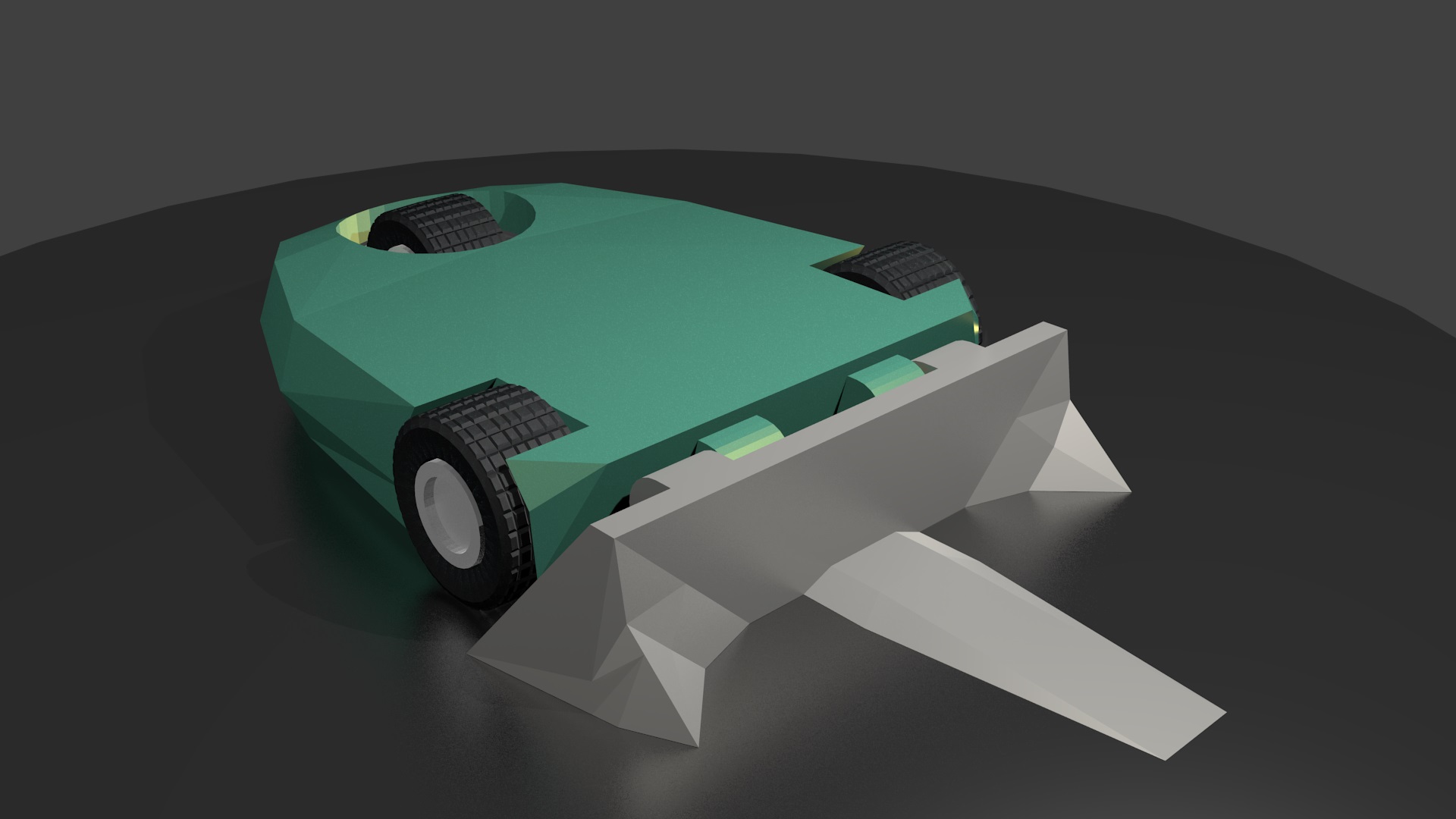 It's a lifter: the front piece can be raised up and down by an actuator that comes out of the front of the robot. But what's going on with the three wheels? It looks like it wouldn't be able to turn very well, doesn't it?
But you'd be mistaken to think so: the rear wheel is mounted on a frame that rotates horizontally, so it can be made to point in any direction. If I want to turn in place, the rear wheel turns sideways. If I'm turning in an arc, it would turn at an angle. This makes the robot drive almost exactly like a 2WD robot, as if the rear wheel weren't there, but with extra turning torque and better stability.

Here are some more angles (sorry for the large image sizes, I'll make the smaller next time): 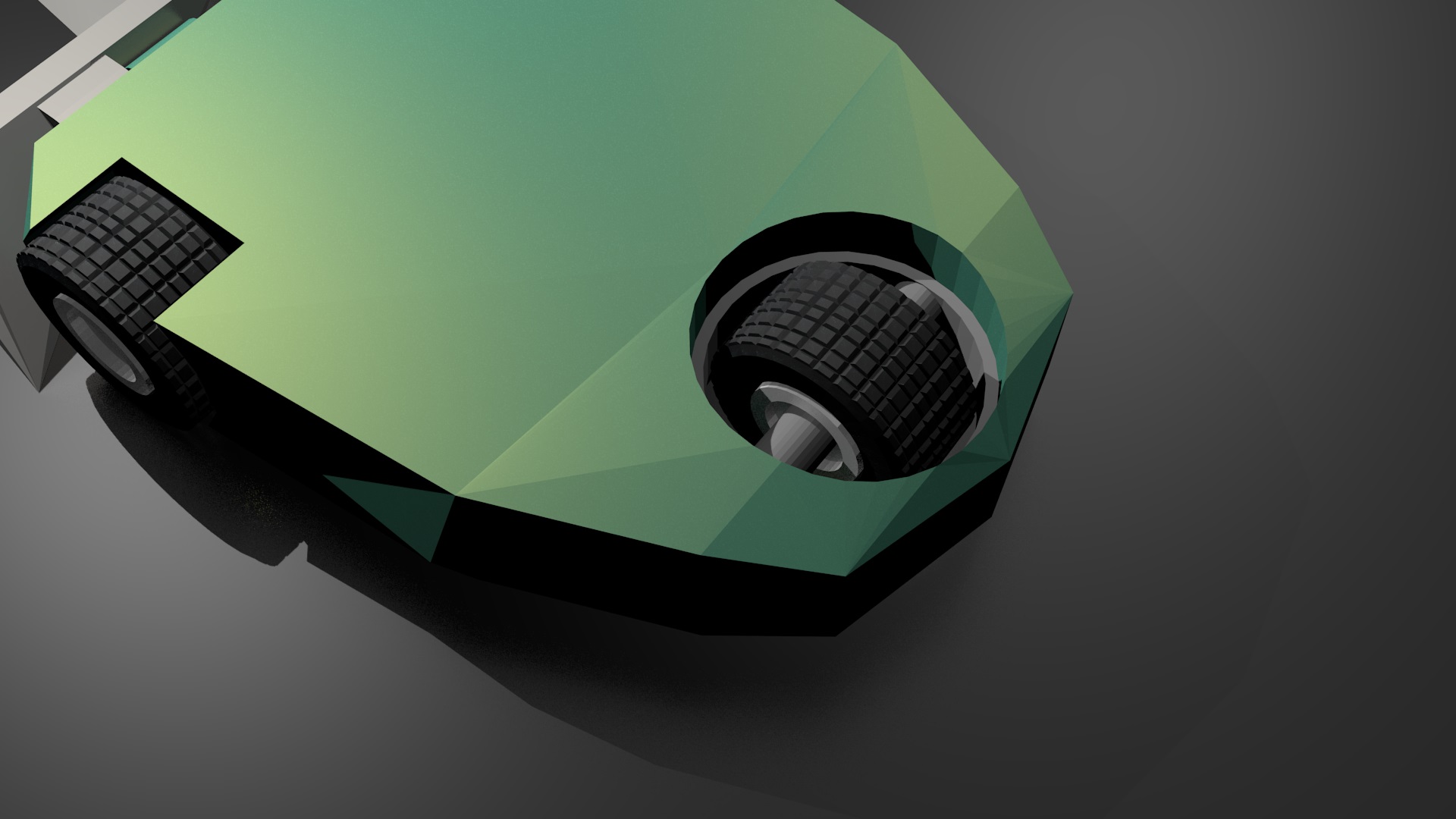 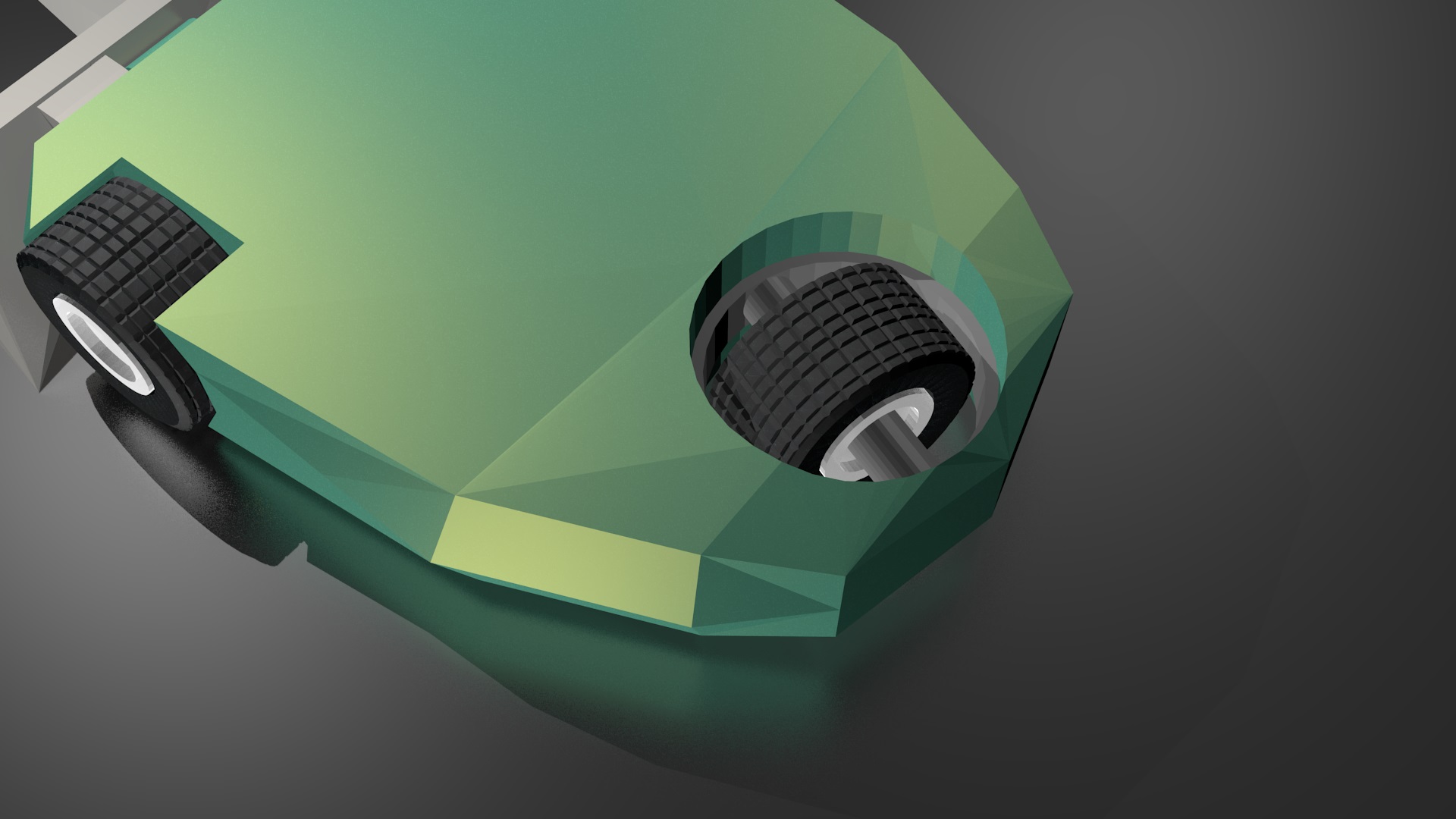 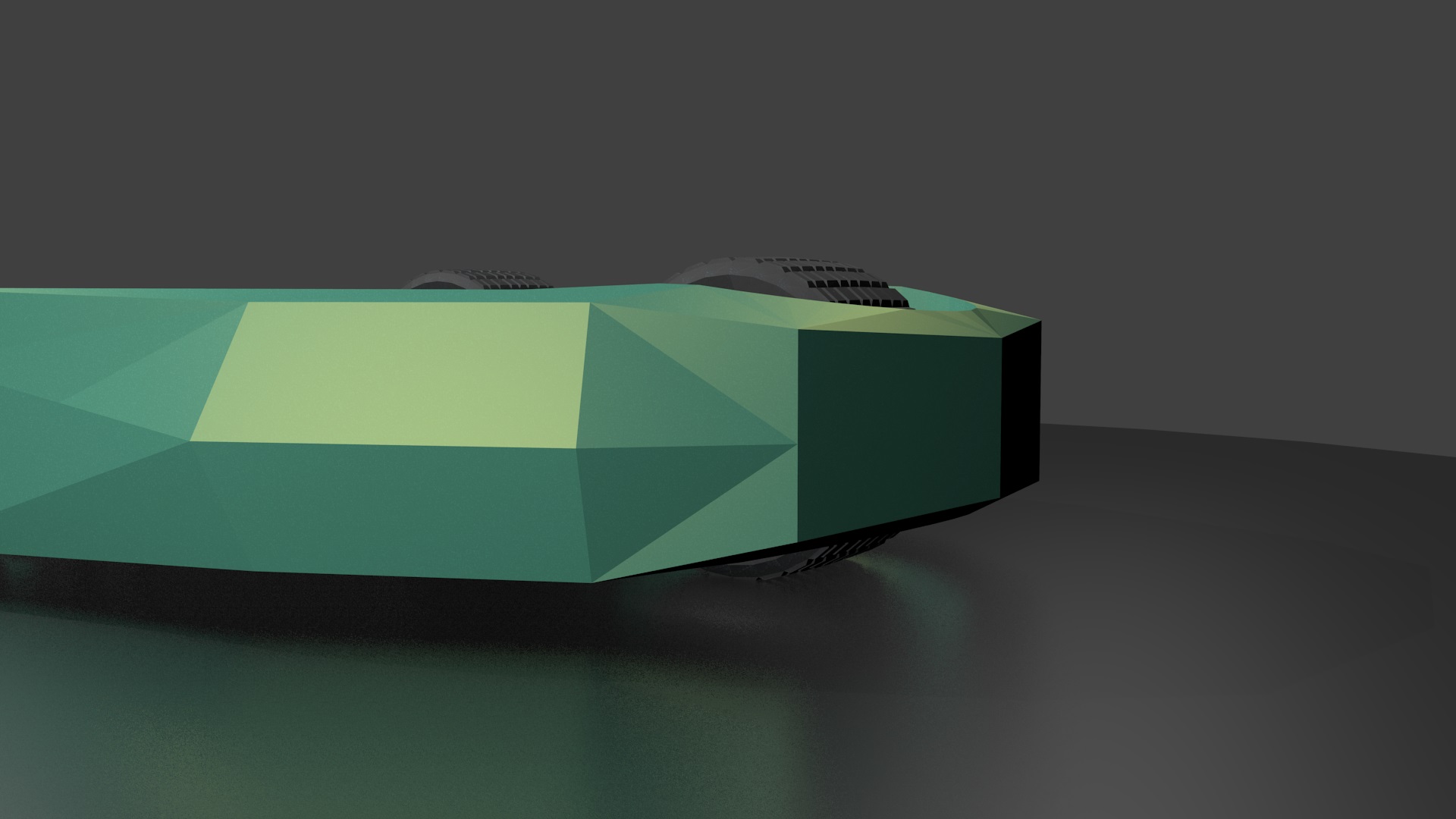 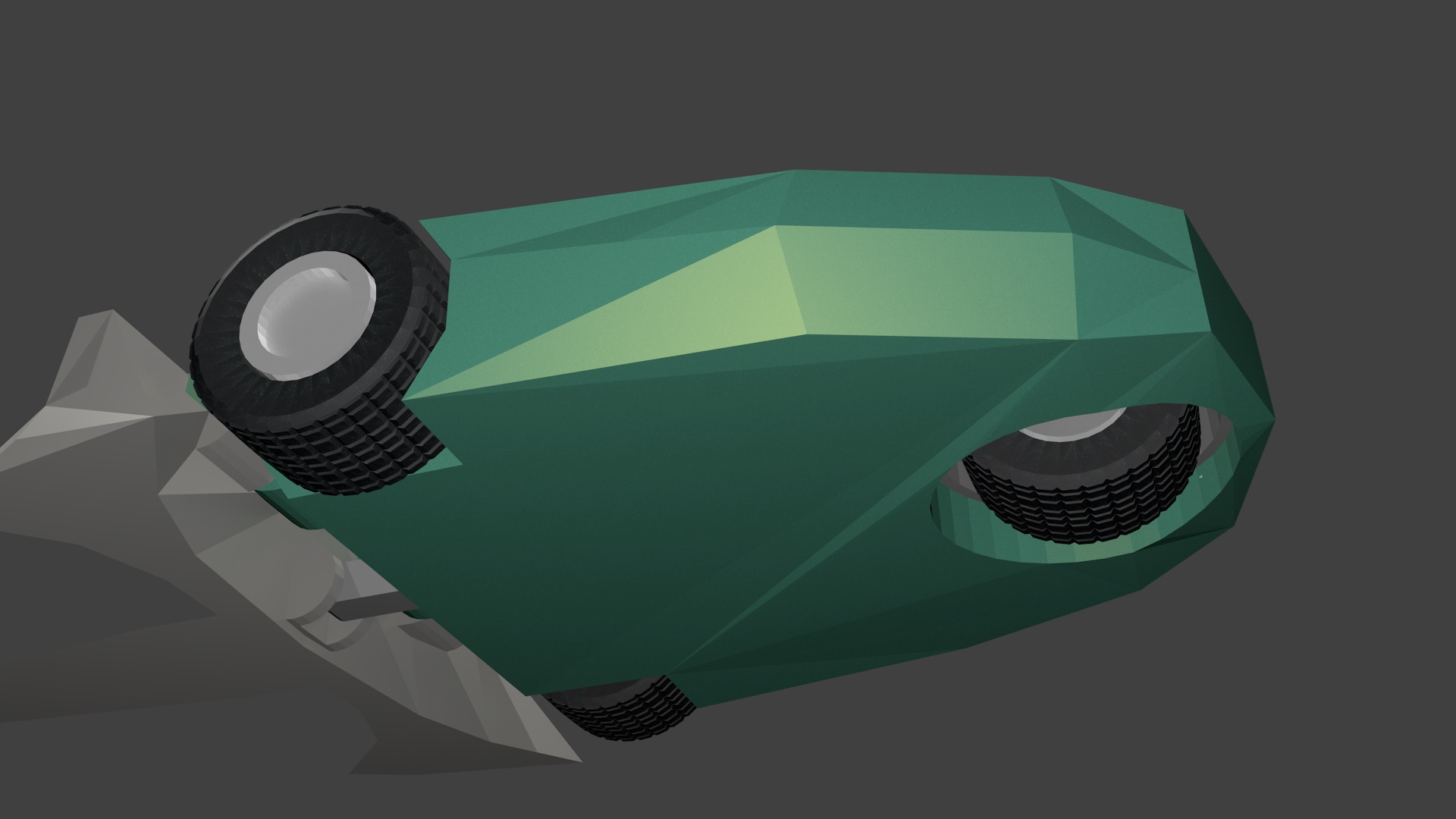