My third and final entry into CBC4 was the middleweight Carapace, as I didn't enter the heavyweight category. Carapace did okay but not as well as I'd hoped, ending its run with a 3-3 record. Hammers aren't all that fun to drive (at least by RP.) And the color scheme is just terrible. Oh well. 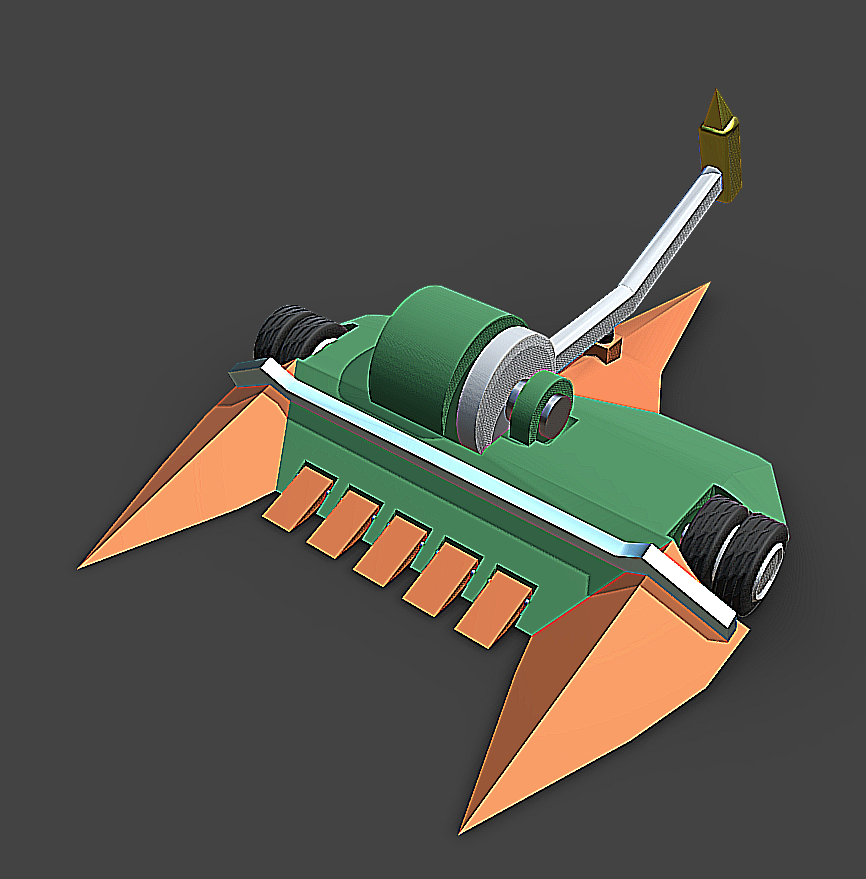 A big pointy weapon on a stick, with a robot attached. The robot is 2WD, the pointy weapon is a hammer, the wedgelets in the middle are hinged.

Okay, I lied, I had one more entry into CBC4. It was waitlisted and didn't make it in, which is a real shame, don't you think?

Then we have Vexed!, an interesting 2v2 tournament, currently stalled. My entry to this was what I felt was an interesting twist on the 360 lifter paradigm, putting the drive on the outside and the lifter as a big scoop in between the drive pods. Was it particularly effective? I'm not sure, but I really like the aesthetics on this one.

Omicron32
Click on images for full-size versions.
This isn't your average 360 lifter: it's also a fully functional 90s game console, featuring beloved games such as "Dangerous Streets" and "Kang Fu". The two drive pods are connected by a solid shaft running through the middle of the lifter axle.

And now we come at last to the current tournament: ROBOT4. I was feeling extraordinarily uninspired for this one, even to the degree of reentering a robot from a past tournament (gasp!) But I decided that because it's single elim, and I was probably going to go out in the first round with most of my robots anyway, why not enter?

Flameout is an attempt at re-imagining my previous robot, Hellmouth, with even more flame. I still have yet to come up with a way to plausibly use the weapon armor on a flamethrower for anything, but the row of flamethrowers would at least give better coverage. It didn't help against a speedwedge though, as Flameout lost in round 1 to Made in Heaven.

It's a robot with a row of flamethrower nozzles, all hooked up to the same tank of... some sort of highly flammable gas. Or maybe it would be more accurate to think of it as a giant cloud of flame attached to a robot. As you should be able to see in the render, its wedge thingy is hinged.

As my featherweight sportsman entry to ROBOT4 (Lil' Yeetums) is already posted here, let's skip right to Invertical. The idea with this was to be a sort of cross between Bite Force and Monsoon. I quite like the idea, I like my render of it a bit less, and I like its chances in this tournament even less than that.

A vertical spinner! Its plow pieces are hinged (limited travel) and removable. The spinner assembly itself is also hinged, similar to Monsoon's design.

And with that we're up to date! That just leaves the new team logo I designed:

I also have SVGs of this but both my image host and this forum don't allow SVG image uploads (boo.) Nevertheless, voila!