Get your creative juices flowing and submit your own media, art, ariticles, or whatever you think people will find at least mildly entertaining to this site. We promote intelligence.
Post Reply
176 posts

Could be worth a shot at some point for me, though.
ICE³ ROBOTICS
"Tougher than a glacier, more might than an avalanche, more fury than a blizzard, and more burning passion than a volcano."
Top

Ever wondered how to top up on potassium in a pinch?

Ever wondered how to cut an onion without crying?

Ever wondered how to prevent wrinkles?

How about treating mosquito and insect bites?

How about treating damaged hair?

Getting rid of splinters?

Ever wondered how to reliably be able to tell how large something is?

Well, my friend, it looks like you could use a... 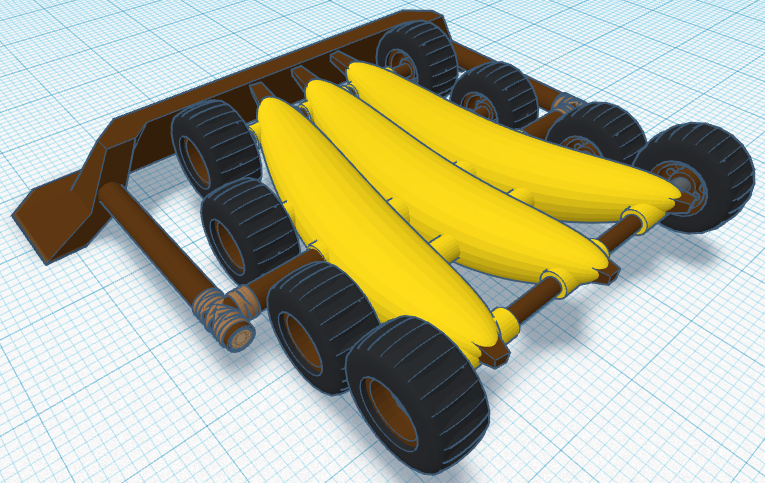 Imported straight from someplace in Central America where people are undoubtedly being exploited for their labour this very minute, this miracle cure for pretty much everything is here to solve your spinner (and like, just about every other kind of bot because - let's be real, 360 lifters are virtually unbeatable) woes. This is 100% genuine guaranteed banana from a particularly hardy strain. What it may lack in taste - some have contended that it's a bit metallic - it more than makes up for in being a sturdy 12 pound ramming and smashing machine.

Yes, this bunch of three tropical fruits is fully invertible, and can self-right as well, just because bananas are awesome that way. It has two pairs of wheels occupying two different planes, for a total of eight wheels, though only four at a time are powered via chain drive. Let's not overanalyze it, okay? This is a bunch of bananas, and the wheel thing was done for looks, not by the evil, exploitative, meta-hating Monsterworks to sneakily gain some competitive advantage. Whoa, that got kinda serious there for a second. Have another banana&#33; 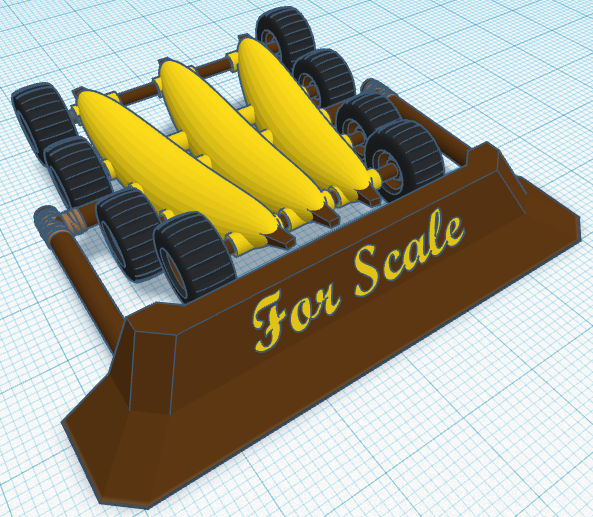 Stats? Boy does this beautiful bunch of ripe banana have some of those. They look like this:

Man, it's like what machine you'd see if Donkey Kong competed on ARC. :P
ICE³ ROBOTICS
"Tougher than a glacier, more might than an avalanche, more fury than a blizzard, and more burning passion than a volcano."
Top

This started out as a trilobite and became a hot rod capturing a 30s dieselpunk-meets-Art Deco aesthetic somewhere along the way. I'm pretty pleased with how it came out, and with the hammers rules updated, I'm looking forward to entering it in ROBOTS. 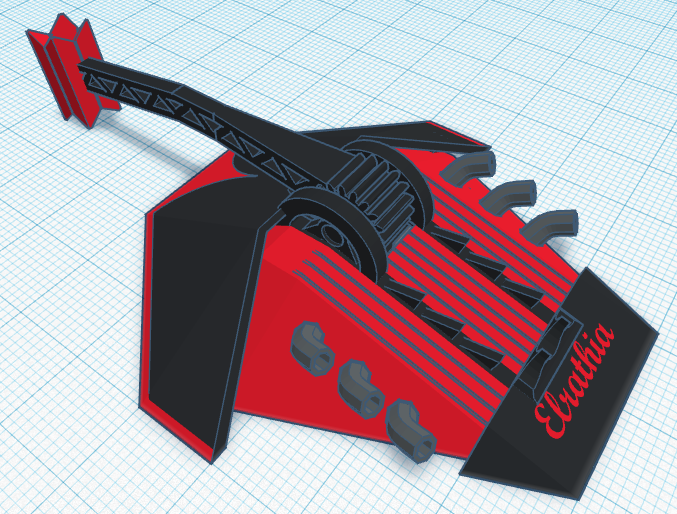 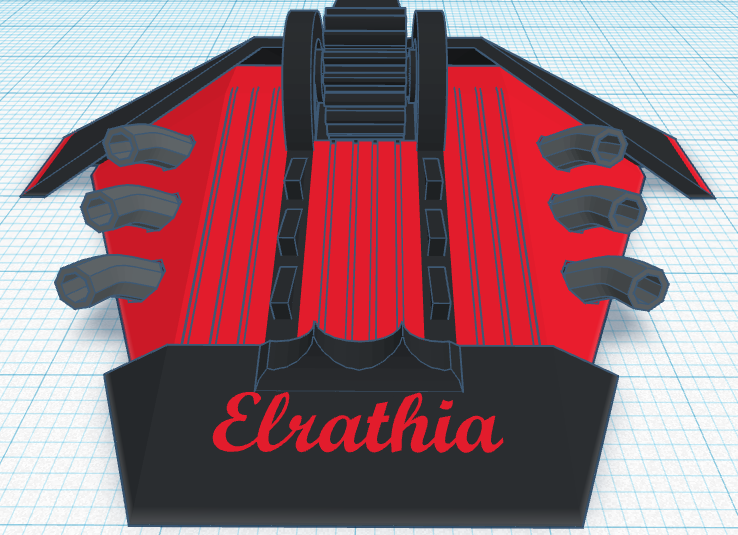 With the new walker and hammer rules for ROBOTS, I've decided to give this thing a whirl. Elrathia's been sitting in my brain for a while now. Anyways, it's basically a walking death-hammer with some panache and chutzpah. Enjoy&#33; 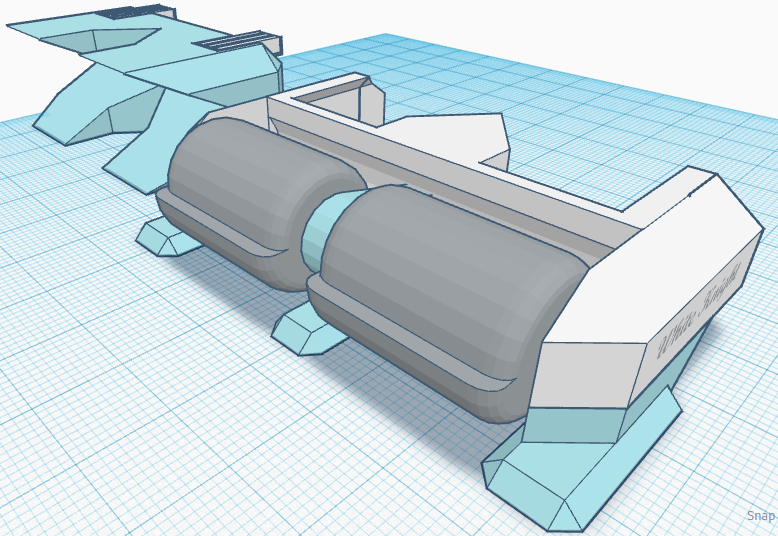 Special Snowflake is a very unique and gifted young battlebot, but others keep trying to attack it, denying it the chance to grow and flourish as it deserves to. Some say it's thin-skinned, but white Knight will have non of that&#33; Riding to the rescue, he will valiantly protect his young charge and provide a Safe Space. Some say he's a bit slow, but these two look out for each other, and none can deny that they're quite a team.

Basically, this is a cluster that can either function as an asymmetrical pair or can link together, via a series of spring-loaded latches (picture your umbrella locking into place when closed) to behave as one robot, with White Knight providing both the weapon and armour while Special Snowflake provides the drive train. They can start in either formation and can link up at any time during a match. However, once they're linked, they can't unlink. If you need any further clarification, click the title for a link to the album. 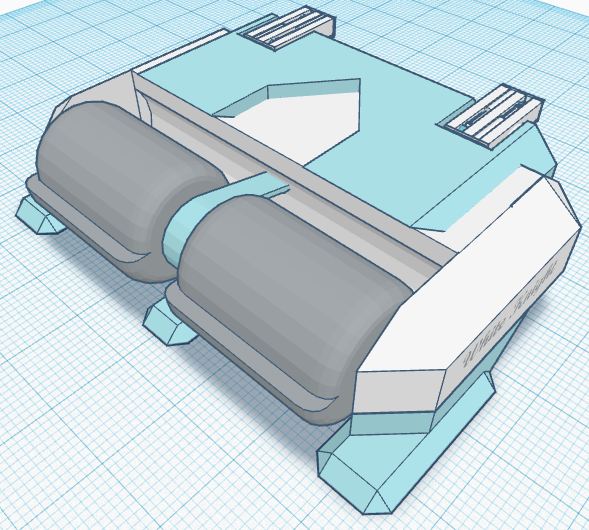 I must say, that's a very interesting idea. Almost a way to get a stupidly-powerful drum that's much faster and more controllable than a regular one. :P
ICE³ ROBOTICS
"Tougher than a glacier, more might than an avalanche, more fury than a blizzard, and more burning passion than a volcano."
Top

<blockquote class='quote_blockquote'><dl><dt>GF93</dt><dd>May 29 2017, 01:40 PM</dd></dl><div>I must say, that's a very interesting idea. Almost a way to get a stupidly-powerful drum that's much faster and more controllable than a regular one. :P[/quote]Almost? That's exactly what it is

...though I guess a 7/7/7 drivetrain for one of them wouldn't be as fast when carrying both.

It's a strange shape, but I'm sure it will be quite effective.

Beware the Monsters of the Deep.

The beast from 20,000 fathoms cometh. I took a lot of inspiration from the rat rod scene and from just wanting to design something for the sake of aesthetics. Now, that doesn't mean that this bot is toothless (figuratively and literally). On the contrary, it's my Gentlemen's Club entry, and with the absence of high KE weapons, not only can I give it all of the corners that I damned well please, but I can skimp on armour if I give it enough speed. This thing is a rammer. A pure rammer. That harpoon is designed to end up in other robots' guts.

Stats will eventually go here, but for now, they're a strict secret.

Now this design I like, quite a lot of character into this too
Top
Post Reply
176 posts