Get your creative juices flowing and submit your own media, art, ariticles, or whatever you think people will find at least mildly entertaining to this site. We promote intelligence.
Post Reply
109 posts

Today I dug around through some old image files and decided to use one of them as a material. Not sure I like it, but thought I'd share anyway since it's been a while. 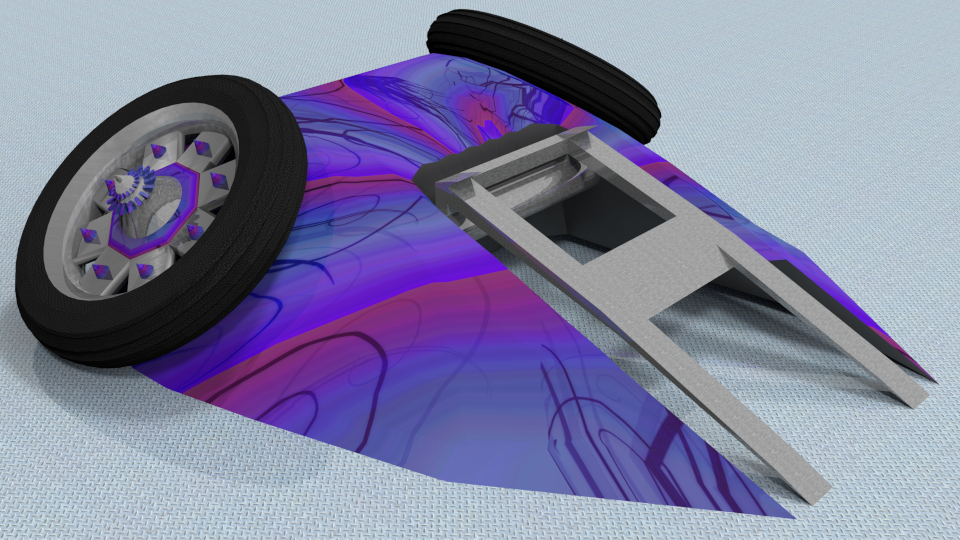 You may not be sure if you like it, but... I certainly do. Very funky.
This account is in a state of dimensional flux
Top 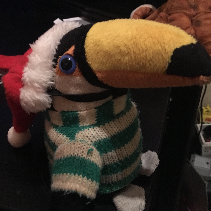 Really nice render. Quite like the paint scheme as well. What's the advantage of having the wheels at an angle like that?

My understanding is that the angled wheels provide a wider stance and lower center of gravity, making the bot more stable at the cost of some control (anyone who actually knows, feel free to correct me on that). I think it would benefit vertical spinners most. I'm using here because it looks cool.
poopity scoop
Top

it does do that, but you can achieve the same effect by keeping all of the weight on your robot low down and just mounting the wheels further out from the center of your robot. Unless I'm mistaken, the only real reason to do it is if it makes your robot look at least 40% cooler than it would if you just had normal wheels on it :P

I like it, but dear god will it get eaten alive by spinners
Last edited by Archangel on Sat Apr 09, 2016 9:55 pm, edited 1 time in total.
‽ ROBOTICS
CHAMPIONS: Lightweight//Ruination 4//Nick's Fuzzy Rules -- -- Hobbyweight//Bot-o-Rama//Buzzkill

<div class='spoiler_toggle'>this post is kinda big, my apologies if the size annoys you. may also contain minor spoilers for gears awaken. you have been warned</div><div class="spoiler" style="display:none;"> I watched the Battlebots Gears Awaken thing earlier today and a weapon used by Black Ice caught my attention. Black Ice had a magnetic bar it could drop on the floor to block off driving paths, take hits from weapons, and such. It kinda failed at that, but I liked the concept enough to try and design a bot for ARC around it.

Keep in mind that literally everything here is subject to change, including the name and the color scheme. Current working title is Drop Zone. So at first glance, we see a pretty typical rammer-type thing with a hinged wedge and those bendy plastic wheelguards. The back looks a bit strange, though. That's the thing that gets dropped. Big ol' brick of metal, large magnetized surfaces on the top and bottom, painted green for convenience. Let's get a better angle on that. It's being held in place by those arms, which drop the bar by rotating into those slots and going inside the bot. They're shaped and positioned specifically to fully fit inside without hitting any internal parts while also being able to hold the bar well enough to drive around without dropping it accidentally. They also are not magnetic, so we don't have any weird accidents. Here we can properly see the size of the bar in proportion to the rest of the bot, with the holding arms retracted. It's pretty big, as it must be in order to stop charging opponents.

<hr />
So here's my train of though as I was designing this, in a sort of problem/solution format:

Problem: The bar used by Black Ice was clearly ineffective. My guess is that the magnets weren't powerful enough, the bar itself was too light to work on heavyweights, or otherwise there simply wasn't enough force holding the bar on the floor.
Solution: Make the bar the main weapon and design the bot as a lightweight. Black Ice had three active weapons, each taking up weight. Naturally, the bar could only be so heavy. The magnets helped make up for that, but there's only so much a magnet can do. Making the bar the only weapon allows me to actually make it big enough to be effective. Furthermore, higher weight classes tend to have bots with more powerful drive motors, but for the most part, a magnet is just a magnet, more or less unaffected by weight class. I believe that as you go up the weight classes, these bars become less and less effective as a result. A lightweight may be able to make good use of it, as its opponents won't be able to push it around very well. Ideally I'd make a featherweight out of this but there's a bit of a long wait for the next Bot-O-Rama so it's a lightweight for now.

Problem: Carrying something on the rear of the bot heavy enough to stop a lightweight with help from magnets might make the bot back-heavy and susceptible to pulling wheelies, which would cause the bar to slide off and detach accidentally.
Solution: The rear wheels are slightly larger than the front wheels. This angles the entire chassis forward, forcing the bar to rest against the inner part of the holding area, instead of solely on the bottom arm. This guarantees that the weight is shifted forward slightly, keeping the center of mass near the center of geometry to minimize the risk of wheely-ing.

Problem: The bar is a large proportion of the bot, so wheel placement becomes tricky. Exposed wheels are the obvious solution, but then spinners are suddenly that much more of a problem.
Solution: Light wheel protection, using the plastic material like Vorpal Bunny has protecting its wheels. I don't think they'll stand up to lightweight spinners all that well, but if they can save the wheels from a direct shot once then they're worth having.

<hr />
The weapon stat would probably control the holding arms, and the bar's armor I guess would be the base armor for the bot, so stats might look something like this:

So basically, about the same as a brick with a flamethrower or a powered wedge.</div>
poopity scoop
Top

I don't know why I made this. 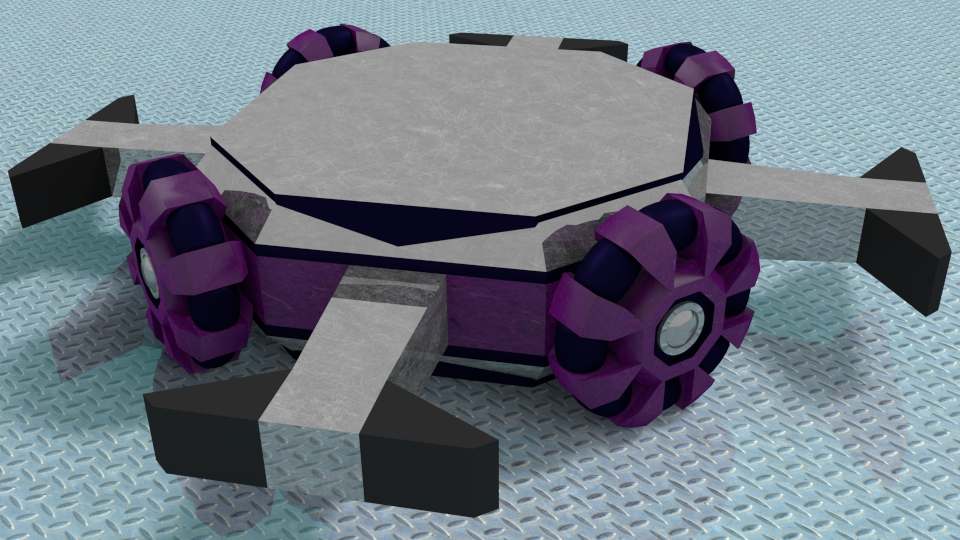 I'll probably redo the wheels because the roller supports are too big, but in theory this should work.

The idea came from a discussion in the Discord chat about a possible CBC housebot that just spins really fast and bounces around the arena damaging anything it hits. The whole thing was a joke, but I wanted to make something like that anyway because why the hell not

So, here's a 4WD melty, omniwheels for minimum traction and maximum pinballing, and purple stuff all over it. Probably will be entered as a jokebot with horrible stats at some point.

Also I have a close-up of the wheel I want to share. But giving it good stats would make it all the sweeter. (Think Glass Cannon's distant cousin)
Last edited by Wolf51-50 on Fri Aug 05, 2016 9:20 pm, edited 1 time in total.
Alpha Robotics - Embrace the carnage!

So this will probably end up being Mega Plowdozer 2. 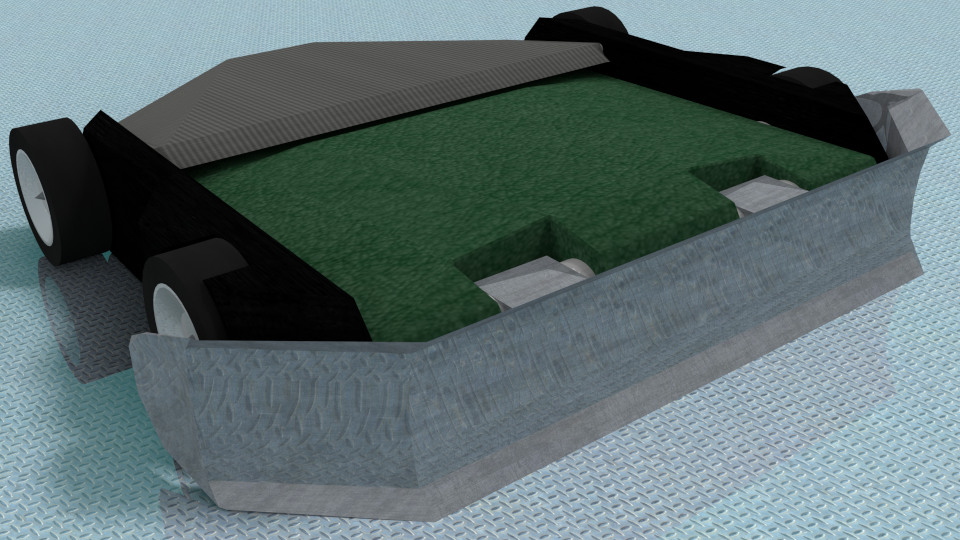 No lifter on this one. I'm going full rammer. The plow now has an even better defensive shape to cover the front wheels. It is also hinged, of course. As are the wheels. Yeah, this thing has hinged wheelpods now, connected at the front wheels. The rear end of the chassis is a wedge. So basically I have a really freakin' heavy hinged wedge out back. But what's that black panel up top? 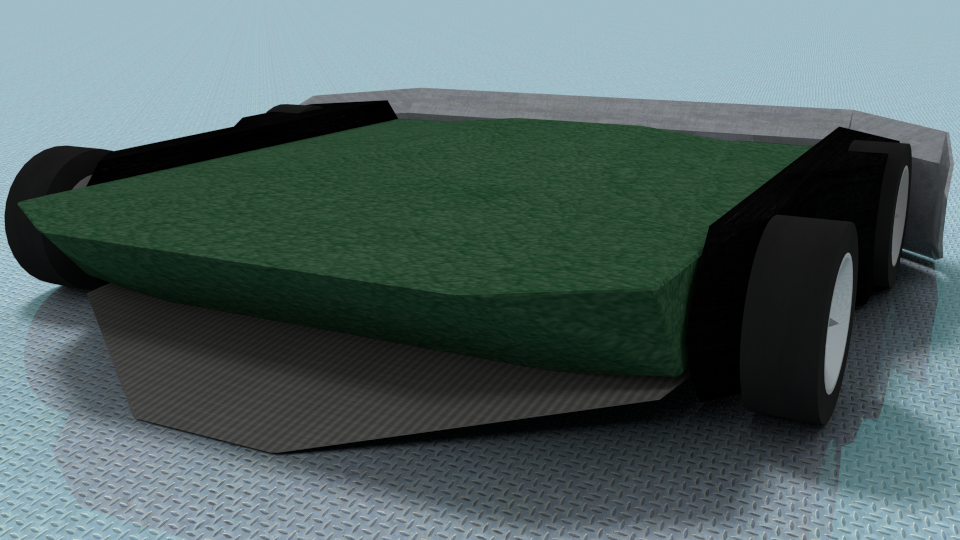 So, uh, there was a discussion at some point about how, in practice, it's impossible for a double-sided wedge to be equally effective both ways up. This is my attempt to work around that. Instead of a double-sided wedge, I have two wedges. There's the big chassis wedge, and the hinged wedge connecting the drive pods. Right-side up, the hinged wedge acts as an anti-monster trucking device. Upside-down, the chassis pushes it into the floor.

Here's a side view in wireframe. You should be able to see the notch in the top of the chassis that allows the hinged wedge to fold in slightly so it works upside-down. 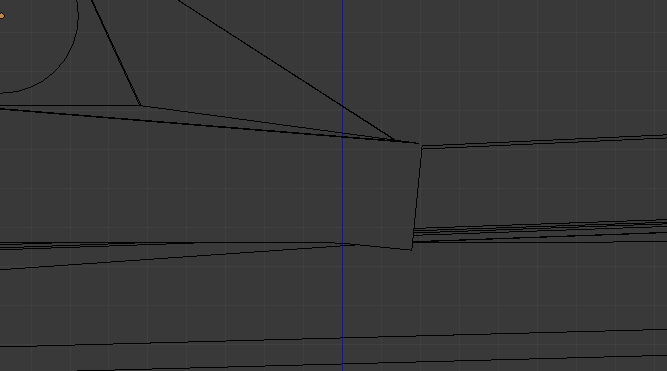 And for you skeptics, this is the closest it gets to contacting the upper lip. Literally millimeters of clearance, but it works.
poopity scoop
Top

I've been super burned-out lately. I also recently started playing Path of Exile. It's a fun little game with a ton of complexity and it will absolutely kick your ass your first few times through. Anyway, I needed a break from robots, so I went basically silent on Discord and played PoE everyday for two weeks straight. I am now burned out on that

Now that I've recovered some of my motivation to do robot-type things, I return with a new middleweight, with a PoE-reference name, of all things Pretty generic undercutter design. This started as a walking clamper, actually. Not sure how I ended up here

I think I'm also getting better at drawing these cartoonish eyes. They're cleaner than the ones on Paranoia IMO.
poopity scoop
Top

Dropping Mudcrab here because I'm quite pleased with how it came out. This is the first drumbot I've made whose shape isn't completely ugly to me. 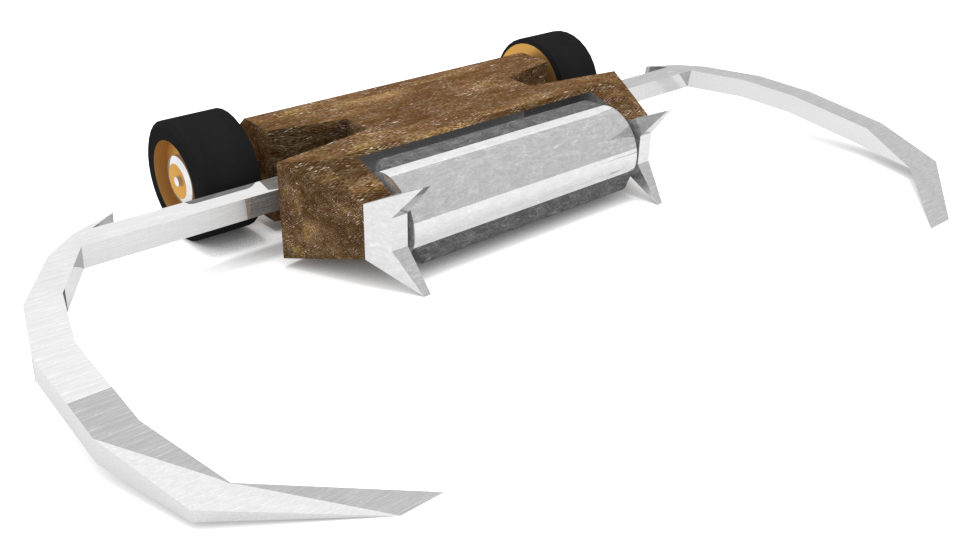 Nah, they're independently hinged. I'm trying out a bolder version of the wedge design on Deception. The idea is to be able to wedge people's sides without actually having to flank them.
poopity scoop
Top
Post Reply
109 posts