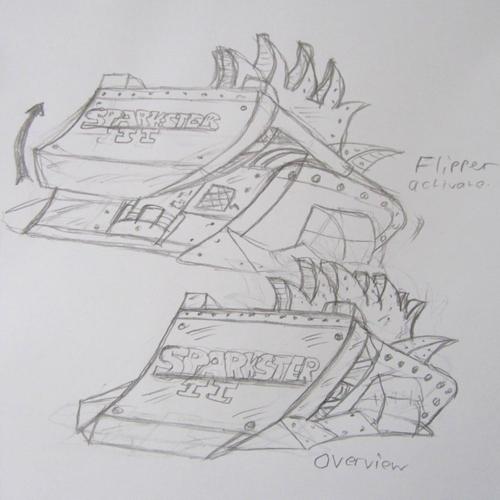 Vastly improved from the previous version and a bit more characteristic, the previous weapon system is still there from the first version, however the weapon is now powered with a dual Co2 low pressure pistons, the wheels are now inside the wheels hubs on the sides to gain some extra protection. He's even had a haircut :).

A brand new machine that is a completely unique design, the robot hoists a front hinged wedge that help assists the robot to get a better chance to have a power shot with the axe and pierce the top armament of the opponent. The machine has a 2 wheel drive system capable on having better turning capabilities.

The Axe is powered by a single gas canister giving it enough penetration when it's near the opponent. The armour is titanium steel.

Really liking the look of both those designs, I have to say. The haircut on Sparkster 2's brilliant&#33;
ICE³ ROBOTICS
"Tougher than a glacier, more might than an avalanche, more fury than a blizzard, and more burning passion than a volcano."
Top

Ladies and Gentlemen, I introduce to you the robot who is aiming to retain it's title from the Ruination tournament. Chemical Explosion&#33; But he's been completely revamped&#33;

It may have the slight similar look to it's previous predecessor who won the Ruination: Contigation tournament, it returns once more tougher and badder than before, except that it had to have a complete reconfiguration after it's previous tournament. New side panels have been added in order to protect the tracked wheels that it still has, except with a different thread this time.

It has a couple of cooling fans to cool down the new motor system which operates the newly constructed drive system of the weapon, which is the classic spinning bar that makes it's return once more; the same design from the winning predecessor.

It can still run inverted too&#33;

Here are the stats of the brand new version of Chemical Explosion:

New ChemExp looks pretty solid. Shorter and wider stance should help it with manouverability a little, but why change what isn't broken? 12 Weapon might be a little wanting, but it's a sturdy and solid design aside from that.

Of course you realise Agent X will be rectifying what happened last time.

<blockquote class='quote_blockquote'><dl><dt>NFX</dt><dd>Aug 31 2016, 07:32 PM</dd></dl><div>New ChemExp looks pretty solid. Shorter and wider stance should help it with manouverability a little, but why change what isn't broken? 12 Weapon might be a little wanting, but it's a sturdy and solid design aside from that.

Of course you realise Agent X will be rectifying what happened last time.

[/quote]The reason why ChemExp needed a major overhaul is due to the other opponents that have had upgrades also, so my machine needed to really be a lot more sturdier and nimble. Though I may adjust the stats a bit more especially the weapon by one point increase.

And in case Agent X comes back for revenge, my robot will be prepared for him once again ;). I'm really happy with the new look.
Top

<blockquote class='quote_blockquote'><dl><dt>Badnik96</dt><dd>Aug 31 2016, 08:19 PM</dd></dl><div>I feel like its weapon is a bit too weak right now, but other than that it's a very solid machine.[/quote]Come to mention it, I'm a little concerned with the "5 Hit shots" which killed the weapon on the previous version. The reason being is due to the comparison between Weapon and armour and I researching as to why thiswas the case and thinking about the armour strength just to give my weapon decent reliability, unlike Carbide from Robot Wars XD
Top

Weapon reliability is determined by the difference between your weapon armor and your weapon power. Right now, that difference is 2. You can bring that difference up to 4 before it becomes an issue like on the previous version.
Team Ignition
Redline: Robot Bastards 1 LW champ
Pyrite: FRR Backlash LW champ
The Debilitator: Cherry Bomb Classic 1 LW champ
Sling Shot: Bot O' Rama 2016 Sportsman champ
Doomerang: Robot Fight Night HW champ
Top

<blockquote class='quote_blockquote'><dl><dt>Badnik96</dt><dd>Sep 1 2016, 10:21 AM</dd></dl><div>Weapon reliability is determined by the difference between your weapon armor and your weapon power. Right now, that difference is 2. You can bring that difference up to 4 before it becomes an issue like on the previous version.[/quote]Alright, what needs implementing to avoid having the same weapon problems as my previous version of ChemExp2?
Top

[/quote]*Thumbs Up* Gotcha, right I've tweaked the weapon up by one point, so now it has 13 power, but that made me drop a point off armour to five.
Top

This robot is 4WD and has a good vast amount of power, but not only is it quick, but it has a rather unique weaponry system, It's a pair of jaws that can act as a spike too, or shaped like a spike. Here's how the weapon works.

1) The robot's weapon manages to penetrate the opponent's armor, the outside metal teeth on the outside of the weapon helps balance the robot itself in order to begin opening up the jaws.

2) Once the jaws begin to move apart, the opponent's armor will start to rip open, showing a hole and possibly breaking something vital to the electronics that operates the opponents robot. or gas canister, the toothed edges also assist the tearing of the armor.

3) The final result should show the gaping hole depending on how strong the armour is. The weapon's maxium angle to split apart is 45 degrees which is an equivalent to a bottle opener's pair of arms.

Interesting take on the classic pincer design&#33; Those massive scissors on the front look pretty scary.
ICE³ ROBOTICS
"Tougher than a glacier, more might than an avalanche, more fury than a blizzard, and more burning passion than a volcano."
Top
Post Reply
480 posts