I came up with the idea since you don't see that sort of design before.
Top 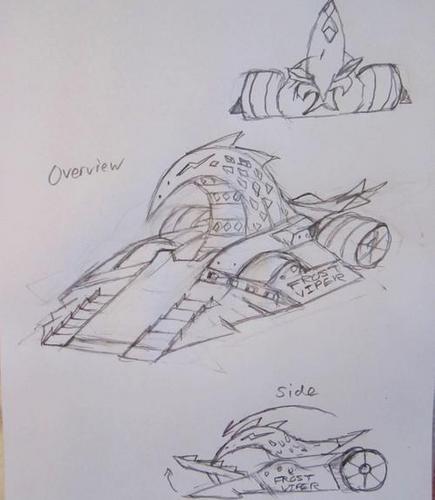 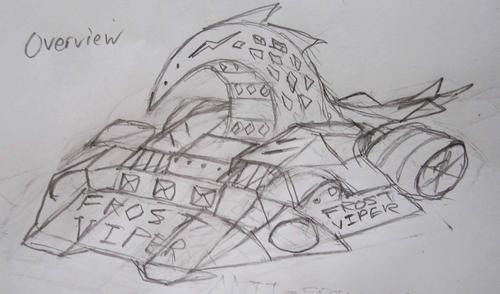 This robot is making a voice heard, the cry of the crushers wanting a comeback, and this is the best possible design I can make it as. The front of the machine is very wedgey meaning it can manage to get in underneath any wedge by pressing before contact. it's a pneumatic crusher that works like a short ranged hammer (They don't call him Frost Viper for nothing ;) ).
Last edited by British-Robotics on Thu Jul 27, 2017 1:20 pm, edited 1 time in total.
Top 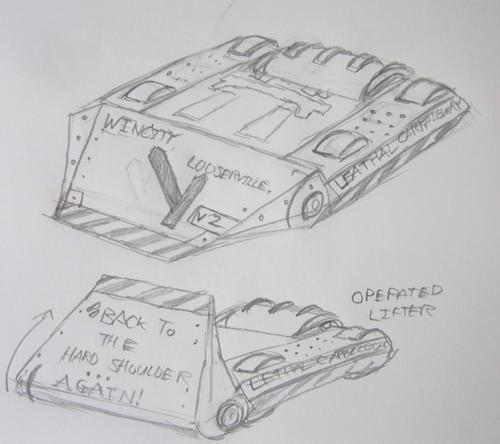 LC Mk2 is a strong pushy robot that has a working lifter and a back up weapon which is a spinning drum which can work as a defensive attack to flick opponents and create some scratches to some armor.
Top 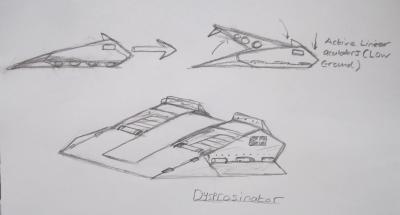 This robot is designed to handle/tank opponents that have a spinning weapon, the robot is 2WD with tank threads for locomotion, also there to prevent the robot from rebounding away from the impact of spinners.

The top armament showing the tracks is covered in Polycarbonate, the rest is metal.

The robot has electric liniar acuators that has a limit of at a few mm of ground clearance of at least 1/4, this will also prevent the drivetrain from being effected since the gap between the arena floor and the chassis itself would be enough to keep the power and locomotion going as normal. The hinged skirts are with angle limiters so they're lifted off the ground with the chassis raised, but contact the ground with the chassis lowered, therefore protecting the tank threads rather well.

The weapon is also electrically powered with a lifiter of up to 120 degrees, it can "only" raise up and even go down. The robot also includes translucent spiked wedges to prevent from being monster truck'ed, maybe catch the opponent from being on top and toppling over it.
Last edited by British-Robotics on Fri Sep 08, 2017 3:50 pm, edited 1 time in total.
Top 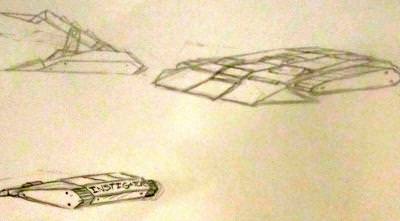 Instigator is a 2WD tracked robot with a 4 bar lifter, the front of the robot has a hinged wedge to help get underneath the opposition, The chassis is a low profile wedge to avoid any exposed areas. 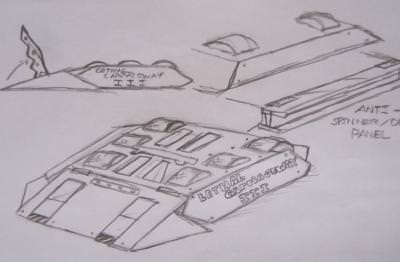 LC3 is a revised version and upgraded version of LC2, the drum is removed and is instead reverted back into a ramming brick. However this version features lifting forks that would help control matches and tactics, the wedge is a feeder wedge and helps get underneath opponents
Top 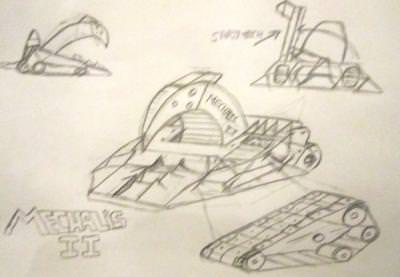 Mechalis II is a vastly improved version, it has a schrimech at the back of the machine, the crusher can go down qucikly than usual. Therefore the schrimech can open up quickly. The front of Mechallis has a spike trap where it's there to trap the opponents in order for the crusher to come into play. The robot itself has track thread locomotion in order to prvent rebounding away from spinners and oppoents with spinning bars when on impact.
Last edited by British-Robotics on Tue Jan 09, 2018 5:20 pm, edited 1 time in total.
Top 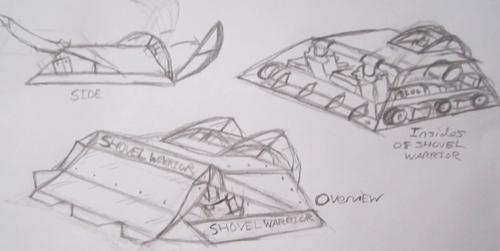 Shovel Warrior has two systems that work seperately. The main shovel and the shrimech on top of the machine, It is 6WD, has strong armour, and has decent speed. The shovel is capability of just about going underneath the opponent to flip over.
Top

The srimech seems like it would need to be longer, i.e. coming more towards the front of the bot, to actually flip it back over. Otherwise it might just slide out from underneath the flipped-over bot. Apart from that I really like this&#33;

Thanks for pointing that out, that problem will be resolved very quickly.
Top 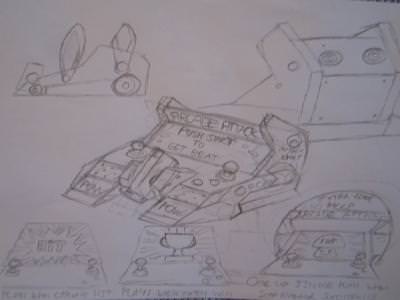 Arcade Attack&#33; features a small spinning bar and an attachment which is a roll cage to help automatically self right the robot in quick fashion, this robot is not a "competitive machine" not unless it's in the mood to win it's game. The robots has a lot of features including a "1up jingle" if it self right's sucessfully, a "Hitsound" if it makes a sucessful hit and a "Game Over" sound if it looses and "Victory" music if it wins. The robot will automatically play a gaming soundtrack at the start of the match depending on who the robot faces. The robot's wheels are inside the chassis and is 2WD. The robot has static wedges in front

Arcade Attack&#33; features a retro paintjob including some of the iconic games throughout the gaming history.

Peforator II is a 2WD bot that is armed with an axe and a static wedge, the config version ha s a different weapon head of a spike tipped hammer and a more armoured plow in the front to deal against spinners. The robot can self right using the axe to act as a schrimech. 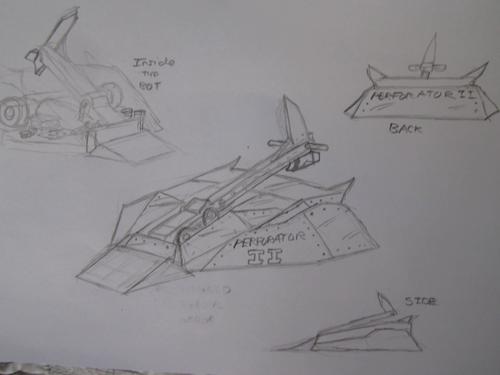 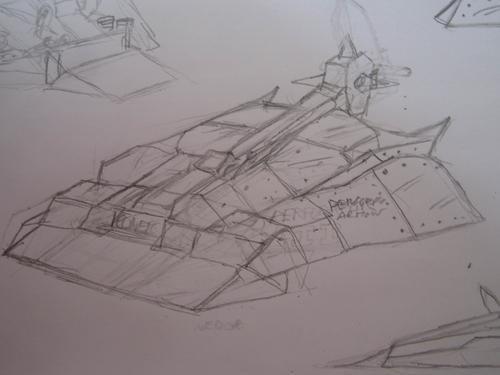 Do you believe in the folklore of monsterous machines? In the dark night of the scrapyard, there is one who hunts and smells for robotic oil. Many say thier robots were torn apart and mangled from such a beast, many are scared to build new designs do to this creature of the night.

Behold, the monster revealed known as...Silverwolf&#33; The head of the crusher doubles as a self righter and has tracked locomotion. 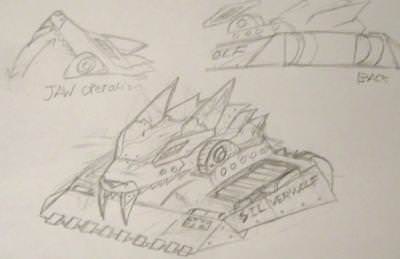 A 2WD flipper robot that has a sleek chassis and a wide enough flipper to get in underneath the opponents.
Top

P.H.A.S.E weaponry has two drums that operate at the same time, the drive belt and motor is hidden in between the weapons. The robot also has a hinged wedge at the back to attack if the opponent is behind the robot.
Top
Post Reply
480 posts