by moziet
hold a spot for me señor :-)

by GF93
Sorry it's taken longer than expected, but TBA spots for all four classes, please. Gonna be good to get back into the swing of things! 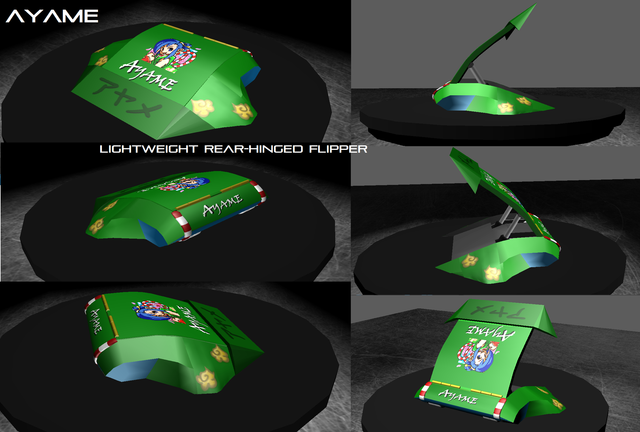 In celebration of both the return of waifubots to the metagame and the new profile pic featuring her and also because I was too lazy to finish the other one I had planned. :v, ARC's favourite kunoichi artiste takes centre stage once more! She maintains the new Kunai Wedge and Tatami Mat attachments from Vexed!, but with a slightly easier-on-the-eyes colour scheme, and an improved flipper. Of course, she still maintains the sleek, low anti-spinner profile, all the speed and defence you'd expect, and she's just as plucky and determined as ever to win. So watch out, or she'll make you laugh... then cry!

EDIT: Much like Chieftain, the Kunai Wedge teeth are painted the same shade of grey as the arena floor to potentially trick opponents into miscalculating moves. Hooray for aggression and pragmatism! :v 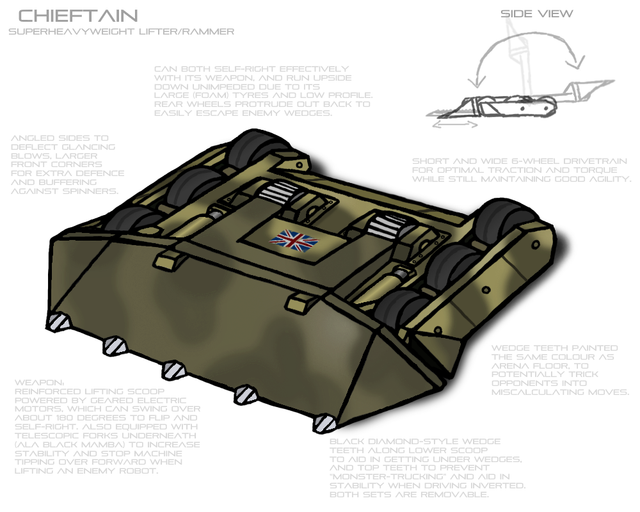 A six-wheeled militaristic brute of a machine that takes influence from the likes of Panzer Mk.4, Crusader and Vanguard, Chieftain (formerly Thundersnow) returns for another shot at the Superheavyweight title. Designed to expand on the telescopic rack-and-pinion fork system that was originally invented for Black Mamba, it's got a reinforced lifting scoop that can both bulldoze opponents effectively and soak up plenty of damage (on top of having removable teeth painted the same shade of grey as the arena floor; so watch your step), a low and wide profile that offers great all-round protection from even the nastiest of spinners, and enough raw power behind its drivetrain to drag a handbrake-parked dump truck, making it a veritable tank in the arena.

Design Notes: Can both effectively self-right and run upside-down unimpeded, both sets of forks on the scoop are removable if need be, and can accommodate a set of anti-overhead steel/mesh bullbars (SEEN HERE) to protect from hammers and the like if required. Much like Black Mamba, the telescopic forks are mounted on a punching bar-like rack-and-pinion system that runs off the same motor as the lifter; which protrude outward when the Lifter opens, and retract when it closes, allowing it to more easily lift opponents and keep all its wheels on the ground without toppling over forward. Due to running off the same mechanism as the main weapon, it costs no extra points to use. Named and themed after the FV4201 Chieftain, the main battle tank of the United Kingdom military from the 1960s to the 1990s.
All times are UTC-04:00
Page 2 of 2